Robert Thomas Wescott, called Thomas, was born 19 April 1860 in Richland County ‘on a farm on Crane creek near Kilian’s mill.’

Thomas was a locomotive engineer until about 1894. An accident changed that. Thomas ‘was walking along by the tracks at the Blanding street station when he was tripped by a piece of board and was thrown, his left hand falling under the wheels of a passing locomotive.’  He farmed for a while after that.

By 1904, Thomas had gone from farming to running a meat market in Columbia. (I am still wondering how a man with a maimed hand ran a meat market!)

Thomas’ meat market was at 1508 Taylor Street in Columbia, about 1.2 miles from his home on Oak Street. Thomas routinely left the house between 5 and 5:30 a.m. Below is the route he took.

Thomas route from home to the meat market

On the morning of May 2nd, 1907, Thomas left at his regular time. Thomas carried a pistol in his hand, a habit he’d started just a few weeks earlier after the murder of Charles B. Green. Green, also a merchant, was murdered by a highwayman not far from Thomas’ home and business. 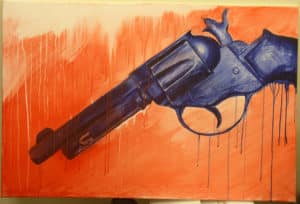 About 5:30 a.m., Robert, age 16, left home ‘to go to the butcher shop to deliver packages.’ On his way there, Robert discovered his father’s body ‘a few feet from one of the buildings of the Waverly school on Lady Street.’ He had been shot in the head.

‘The bullet entered the left side of the head just above the ear and emerged on the other side, slightly in front of the ear.’ A pistol was on the ground about a foot from Thomas.

Robert was so distraught that ‘he could not take it upon himself to go home and break the news to the rest of the family, but told some friends.’ The friends summoned the police.

Next week: part 2 of Thomas’ murder

All quotations from The State newspaper