My great grandmother, Lizzie LEE MARTIN, was born Elizabeth Patience LEE on 12 May 1868 in Richland County, South Carolina. She was the 4th child of 8 children born to Uriah Henry LEE (1813-?) and Jane CAMPBELL LEE (1841-?).

Lizzie marries and grows a family

Lizzie married my great grandfather, A. B. MARTIN, about 1885. They were neighbors, as much as people could be neighbors in a large farming community. They likely met through church. A.B.’s father, Phillip, and Lizzie’s father are only one page apart on the 1880 census. Both families were living on land that would become Ft. Jackson in the late 1910’s. 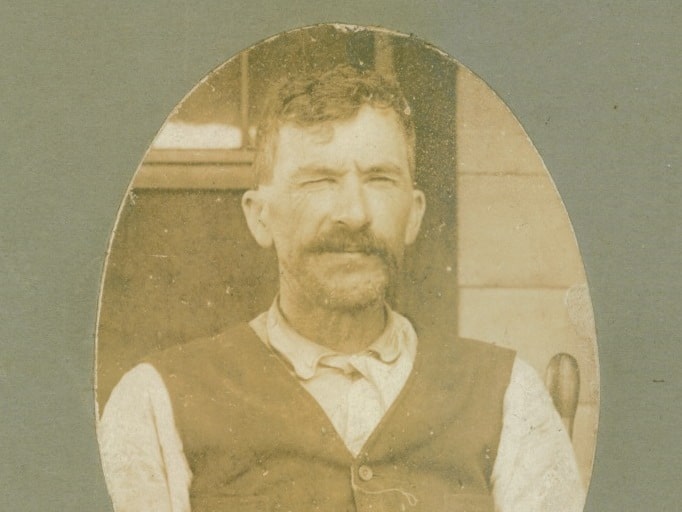 Adolphus Burdine (A. B.) Martin

Lizzie and A. B. had their first child, Joel Daniel “Daniel” MARTIN in 1886. They had 15 children in 25 years. A.B. was a successful farmer with about 350 acres in the Ft. Jackson area. Lizzie kept house and raised children. The sons helped on the farm, and there were probably hired hands, too.

In 1917, life for 49-year old Lizzie was probably going on the path she expected. She married young at 17, started having babies right away, and spent her adult life taking care of her husband and children. She was a grandmother now, too.

Lizzie likely envisioned A. B. and herself continuing to farm the land until Daniel took over and then still living on the land until they went to heaven. Instead Lizzie’s worst nightmare came true.

In March 1917, the strong and capable A.B. died at 50 years of age. Go here to read his story. Suddenly, 49-year old Lizzie was a widow with four children under 18.

No doubt Daniel and the others worked the farm and kept it going…that is until 1918 when the U. S. Government decided they wanted the land for Ft. Jackson. Not only was Lizzie a recent widow, but she was losing her farm and her community, as well. 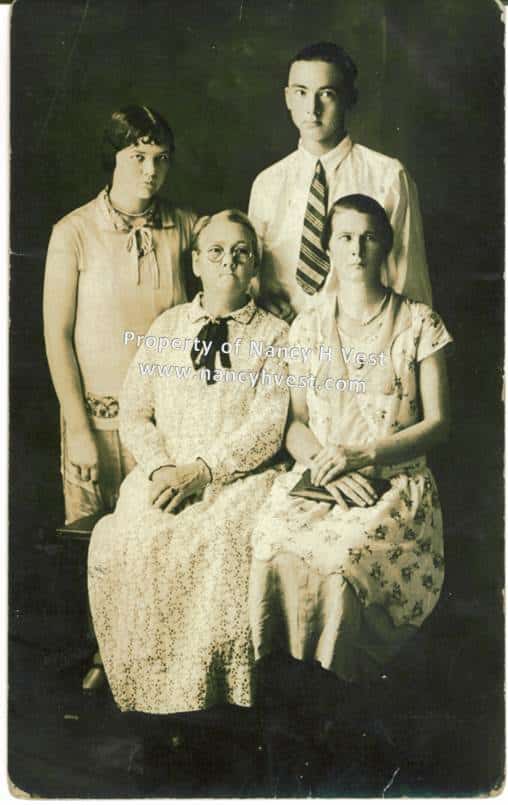 Back: Stella and Gary Front: Lizzie and Florrie about 1927

In 1920, Lizzie and five of her children (Hubert, Adolphus, Florrie, Stella, and Gary) were living in the Winnsboro Mill Village in Winnsboro, Fairfield County, South Carolina, about 33 miles from the Ft. Jackson land. Lizzie kept house; the youngest children went to school; and the older three worked at the cotton mill. Lizzie and her family were living next door to her brother, Benjamin David LEE, and his wife, Aretta MARTIN LEE, who was a sister of A.B.

Here’s a link to a photo from the Winnsboro Mill Village from 1925. Check it out. You may need to enlarge it a little bit.

I’ve known Lizzie’s facts for a long time, but I didn’t often think about what the facts meant. (So many ancestors, so little time.) In June of this year that changed because I became a widow, too.

I know Lizzie better now, and I have a new appreciation for her. Spouses usually become interdependent, especially the longer the marriage goes along. Losing a spouse is like losing half of yourself. It’s literally like half of you is blank, missing, and cold. Thinking is difficult, let alone making decisions.

And as much as I try to explain it, I have to say it’s indescribable. Coping with the loss of my husband is an ongoing struggle, and will be in earnest for the next few years at least. I couldn’t imagine losing my home and community at the same time, like Lizzie did.

Going on even when you feel you can’t

I can tell you that Lizzie was a tough woman. She didn’t just give up and close herself up and collapse. She moved her family to where jobs were. She continued raising her underage children while taking care of the older ones that moved with her.

But I imagine that in those hours when she was alone while the others worked or went to school, Lizzie thought about A. B. and her life with him. She was probably shaken to her core when she was surprised by a memory triggered unexpectedly. She longed for the life she had, but knew there was no way to go back. There’s only going forward. Knowing that she kept going forward, gives me courage to do the same.

In 1930, Lizzie’s daughter, Florrie, was the head of the household. Living with Florrie and Lizzie were three more of Lizzie’s children (Stella, Gary, and Maggie). They lived in DeKalb, Kershaw County, South Carolina. The ones who worked did so at a cotton mill. 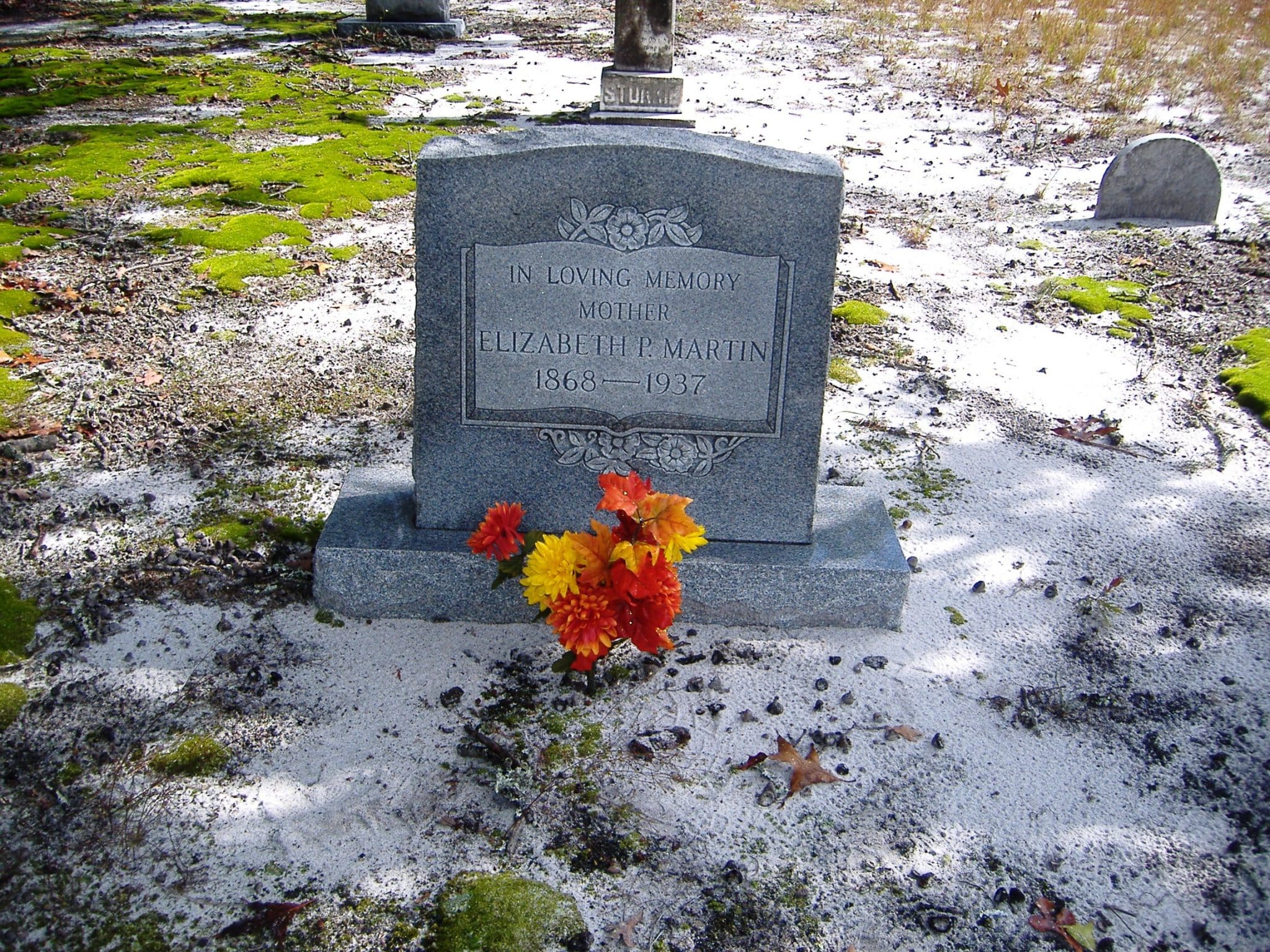 The final part of Lizzie’s life

Lizzie died in 1937, 20 years after A. B.’s passing.  Her death certificate says she died of cardeo-renal and asthma. Her son, Gary, said that she actually died of cancer that came on because she wasn’t cleaned out good after her last pregnancy in 1911. Gary said that Lizzie had been in pain for years.  So on top of losing her husband, home, and community; she was living with chronic pain.

I’ve always admired my grandparents and beyond. They lived hard lives, especially compared to the cushy existence we enjoy.But I have a new found admiration and respect for Lizzie Martin.

Lizzie was a hard-working farm wife with over a dozen children, she lost her husband at a young age even for those days, she lost her home and her community, and she lived with chronic pain for over two decades. Yet she persevered and continued on. She is now one of the rock stars in my family tree.

Click here to subscribe to my nearly weekly newsletter and receive a free e-book, Write Your First Life Story Today
« The curious death of Joseph Lynch
“I can steer them through he–“ »