William Thomas PRICE (born 1856) was the oldest of four children born to Charles Thomas PRICE (1833-1902) and MaryEllen Howard WHITE PRICE (1828-1910). Will, as he was called, was brother to Clarence PRICE who I wrote about early in the year. You can read about Clarence here: Clarence Montgomery Price, brother of Will Price and my great-grandfather

Will’s other brother was Montgomery PRICE (1859-1947) who was my great-grandfather on my dad’s side. This makes Will my great grand uncle.

Will was born in Poolesville, Montgomery County, Maryland. He had a 4th grade education, and he worked as a laborer for most of his life and mostly on farms. 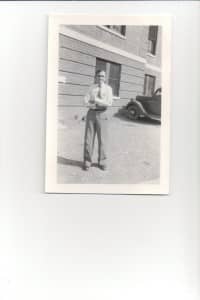 Will Thomas Price, who went by Will

In the early 1930’s Maude was able to secure a bed at the Washington Home for the Incurables for her alcoholic father. He was in his 70’s. According to the census, he was living there in 1935 and 1940.

Maude was the only one of the children to lift a finger to help Will. Had she promised her mother to take care of him? I don’t know. But from the letters, I know that caretaking for Will was stressful for Maude who was married and had children, too. Will had lived with Maude and her family for a while which was unsuccessful to say the least.

The Home for the Incurables was like a nursing home, but the residents could go out during the day if they were able. This was a problematic for Maude since Will had to keep sober to stay there, and Will’s sister, Gertie, and Gertie’s daughter, Myrtle, would sometimes visit and give Will money…which he would use to buy liquor.

Will went blind which kept him from wandering the streets of Washington looking for a drink, a relief to Maude no doubt. My father told me that Will fell down some steps at the Home and died as a result of the fall. He passed on 10 Oct 1943 at 87 years of age.

Will is buried at Monocacy Cemetery in Montgomery County, Maryland, along with many of his PRICE relatives and his wife, Algie. Algie has an ornate stone marker. Will has no marker at all. I guess Maude figured she done enough for him already.