First, the basics…Clarence was born in Montgomery County, Maryland and lived there his entire life. Clarence was listed in his father’s household in the 1870 and 1880 US Federal Census.

Clarence married his first cousin Ida Madora Price (1868-1927) on 11 Oct 1893 at the Washington, DC home of her uncle, Jim Carlisle. A notice of the wedding was in the Montgomery Sentinel newspaper. * Clarence and Ida had a son, Wilford Price, in March 1899. Wilford passed that same month for reasons unknown.

The couple was living in Montgomery County in 1910 according to the census, and Clarence worked as a merchant in a grocery store alongside two of his wife’s siblings who were also his first cousins. 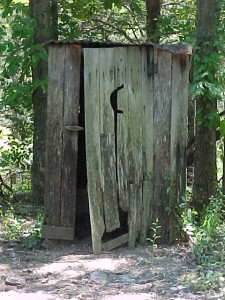 Clarence died on 24 Sept 1912 at 45 years old. According to the death certificate he died of carbolic acid poisoning by suicide. His suicide was also noted in the Montgomery Sentinal.* Not so seemingly ordinary anymore, is he!

According to Mrs. Elgin Clarence was working at his uncle’s store, and he was caught stealing money. Instead of facing up to what he’d done, he locked himself in the outhouse and drank carbolic acid (aka phenol).

From what I’ve read carbolic acid poisoning is a terrible way to die. Perhaps it was just the first thing he could get his hands on.

When I told my father this story, he wasn’t surprised. Dad was raised by his grandfather, Montgomery Price, brother of Clarence. Dad said that whenever Clarence’s name came up, everyone looked embarrassed and ashamed and the subject was changed quickly. He said he knew it had to be something bad.

Click here to subscribe to my nearly weekly newsletter and receive a free e-book, Write Your First Life Story Today
« Merry Christmas to All
52 Ancestors Week 2 – Boy in a man’s body »