When I was growing up I often heard family speak of Hallie and Dosia and Ellen. I knew they had lived with my grandma, Florrie Thomas Martin, and her family when my grandma was a girl, but I didn’t know much more than that. I asked my cousin, Agnes, who is old enough to have known them all, and she told me the story. 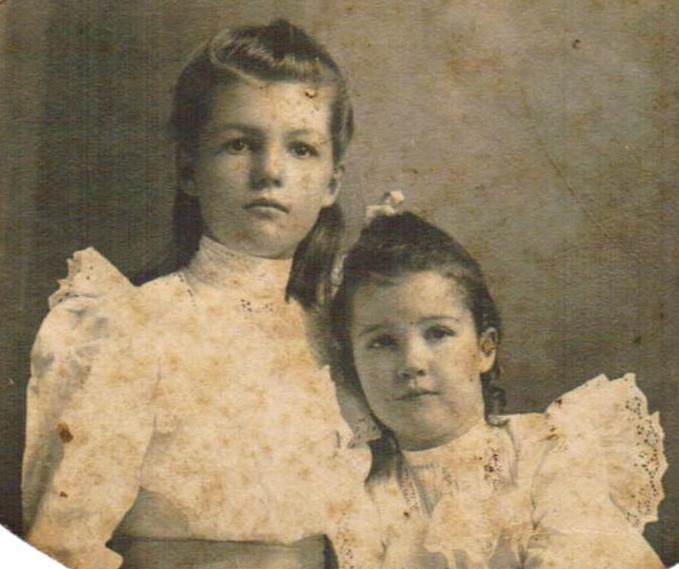 Hallie Atan Thomas (2 Nov 1898 – 9 Dec 1966) and Theodosia Marie Thomas (3 Aug 1893 – 21 Jan 1954) were the daughters of James Renatus ‘Ren’ Thomas and Laura B. Roberts. Ren was the brother of Jeremiah Daniel ‘Dan’ Thomas, my great grandfather. According to Agnes, Laura ran off with a neighbor, leaving the girls with Ren. Ren, who worked on the railroad, couldn’t take care of the girls.

Ren loaded the girls and their clothes into a horse-drawn wagon and took them to his brother, Dan, and Dan’s wife, Margaret Ann ‘Maggie” Grant Thomas. Dan and Maggie raised them from that point on. Agnes did not know exactly when this happened. According to the census, Dosia and Hallie were living with their mother and father in 1900, but living with Dan and Maggie in 1910. Do the math. 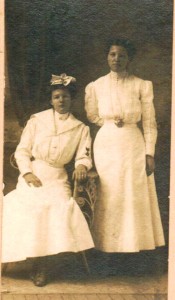 Ren was still in their lives, and when he was older he lived with each daughter for a time. It’s just that they needed a two-parent home when they were young. My grandma had a brother named Herbert and a sister named Aggie. Poor Herbert must have felt overrun with these four girls in the house! It was actually five for a while when you include Ellen. I’ll tell you about her in a moment.

Hallie married Lamar Felder, and they had three children: Lamar, Jr., Mildred, and Ruth. Lamar Sr. died in 1939, and Hallie remarried to a man named Falls. I don’t know his first name. Hallie and Lamar Felder, circa 1920

Dosia married Arthur Martin (no relation to the other Martin’s in my family). Dosia started going by Marie at some point; she is listed this way in some census records and on her death certificate. She and Arthur didn’t have any children. Now about Ellen. Dosia’s husband had an older brother named Duff Martin. Duff’s wife, Claire, gave birth to Ellen in 1906. Claire was very sick after the birth and she asked their friends Dan and Maggie to take Ellen to raise because Claire felt that she would die which she did not long after Ellen’s birth. Duff was a farmer and wouldn’t be able to take care of Ellen. Dan and Maggie took Ellen and raised her for a time. I’m sure Maggie had plenty of help from her daughters and nieces. Eventually Ellen went back to live with her father and her older siblings. Duff was about 18 years older than his brother, Arthur (Dosia’s future husband), so all this with Ellen took place long before Dosia and Arthur married.

Ellen married a man named Cooke/Cook. When my grandma would visit in South Carolina, she would always go see Ellen Cooke. I knew she and Grandma were close, but I thought they were just good friends.