John Henry WISE was one of the many people who lived on the Fort Jackson property before it was Fort Jackson. Wise was a saw miller and a logger. On this particular day in February 1877, Wise hired several relatives and neighbors for log piling.

The neighbors included brothers John Henry MILES (who went by Henry) and William MILES; and their brother-in-law Jesse GATES who was married to Henry and William’s sister, Fannie.

Henry, William and Fannie were all siblings of my 2nd great-grandmother, Margaret FUTRELL MARTIN.  For whatever reason, Henry and William sometimes used Miles, their mother’s maiden name, instead of Futrell.

After finishing with the logs many of the men who worked that day, if not all, started drinking. And as you can guess, no good came of it.

William Miles started arguing with Jesse Gates after William made a comment about Fannie. After exchanging a few words William struck Jesse with his fist. Jesse stepped back, drew a pocket knife and stabbed William. 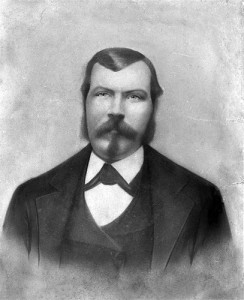 John Henry Miles, witness to the murder of his brother William

Henry saw his brother collapsing and grabbed him, lowering him to the ground. William looked up at Henry and said, “Brother, Gates has drained the life from me,” and died. He was 30 years old. Gates threatened the other men that he would cut them also if they bothered him.

Murder charges were brought against Gates, and a coroner’s jury was named to view the body to determine how William died. The results were that he died from being stabbed by Gates.

Even though Gates was indicted for murder, the charges were dropped. Was it decided he acted in self-defense? Or was it ruled a domestic family affair? We don’t know and never will.

Fannie and Jesse split up at some point. Not surprising. After all, Jesse did murder Fannie’s brother. Even if it was self-defense, how do you get past that?

Fannie married a man named Thomas Davis. Thomas and Fanny (along with her only child with Jesse Gates) left South Carolina for Alabama and eventually moved to Florida. Thomas and Fanny went on to have several children of their own. Fanny died in 1903.

This story was told to me by John Howell, another Fort Jackson family descendant (and probably a distant cousin, too, since we seem to be related to every Fort Jackson family!)  John’s great-grandfather was John Henry Wise, the man who hired all the workers that day.   Portions of the above story are John’s words, not mine.  I appreciate him allowing me to use his words for this blogpost.