William Wallace PYLES, my 2nd great grandfather, was the third of five children born to John PYLES/PILES and Rebecca Poole PYLES/PILES. He was born about 1837 in Montgomery County, Maryland, and he went by Wallace.

Wallace was minimally educated. He was listed as a farmer on every census he appears in, including 1850 when he was only 13 years old. At 22, he married Emeline PRICE. Over the next 14 years, they had eight or nine children, one of which was my great-grandmother, Sarah Rebecca PYLES PRICE.

In the 1860 and 1870 census records, Wallace is living within about 10 miles of his parents, either in the Medley’s district or the Clarksburg district of Montgomery County. His personal and real estate value increased considerably between 1860 and 1870, too. According to an article in the Montgomery Sentinel newspaper, Wallace was ‘a highly respected citizen of the county.’

Life appeared to be going well for Wallace and his family until 1877. According to that same article, ‘He was weakened and thrown into bed by diligent application of labor which proved to be unsuitable for the preservation of his good health.’ 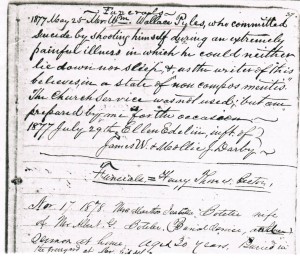 Wallace was sick for several months and, according to church records, ‘he could neither lie down nor sleep.’ The illness finally got to Wallace, and probably seeing no chance of recovery, he committed suicide on 24 May 1877 at 40 years of age.

According to the Sentinel, ‘Being of inordinate industrious disposition, on the morning of the rash act, afore-mentioned, he had so far regained strength as to enable him to get from the bed, unknowingly to the family, and procure a loaded gun, which he placed to his breast while in a sitting posture and with the ramrod pushed the trigger, the contents entering his body where it remained. Death was instantaneous.‘ Wallace was only 40 years old.

The church record of the funeral says Wallace was believed to be ‘in a state of non compos mentis’ which means ‘not sane or in one’s right mind.’ Months of no sleep and no relief from the pain would certainly make a person go out of his mind.