My 3rd great-grandfather, William H. GRIFFIN, was born about 1820 in Wayne County, North Carolina. Wayne County is located east of I-95 and north of I-40. The county seat is Goldsboro. I have no conclusive evidence about the identity of William’s father.

The next I know about William is the 1850 census where he is listed as living in Marion, South Carolina with 2 small children (John and Mary), no wife, and 60-year old woman, Zilpha, who was probably his mother.

I don’t know anything about the mother of John and Mary, but I know William was married again soon after this 1850 census to my 3rd great –grandmother, Margaret PEARSON GRIFFIN. In October of 1851, William and Margaret’s first child, Flora Ann GRIFFIN was born. Flora was my 2nd great-grandmother. William and Margaret went on to have 9 or 10 more children after Flora. 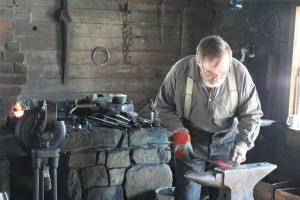 Not William H. Griffin, but a blacksmith in Lancaster, Pennsylvania

In 1860 William and his family were living in Bennettsville in Marlboro County, South Carolina. According to census records, William was a blacksmith, which is highly unusual for my Carolina ancestors of that generation; most everyone else was a farmer.

My grandmother, Flora Jane THOMAS MARTIN, said that William was a reverend. I haven’t found records to confirm that, so he may have been a lay preacher. According to another family historian, the family folklore handed down is that he was a Baptist minister.

Flag of the 24th SC Infantry. Found at http://batsonsm.tripod.com/b/reg24.html

In December 1861, William and his son, John, enlisted in the 24th SC Infantry. They were both assigned to Company B. William was immediately given the position as a commissioned officer – Second Lieutenant. He was 42 and John was 16.

On July 4, 1862, William resigned his commission and left the army. I don’t know what happened, but another family researcher speculates “that due to his age (42) William  lacked the stamina and endurance required by his post. The fact that his resignation was readily accepted suggests he was over the normal age for required military service.

Most Southerners over age 40 served in the Home Guard, not in the regular army. Ordinary foot soldiers could not resign, they could only desert, and might be hung if captured. So William, at age 42, was definitely in a different category.”

William returned home and to blacksmithing, and perhaps to lay preaching as well. 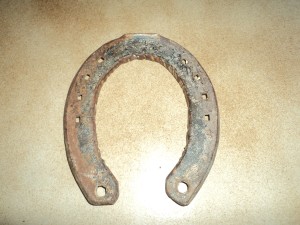 In 1870, he and Margaret and some of the younger children are living in Brightsville, Marlboro County, South Carolina which is about halfway between Bennettsville, South Carolina and Hamlet, North Carolina.

William doesn’t appear in the 1880 census, and his youngest child was born in 1874, which says he probably passed away before 1875, in his mid-to-late 50’s. I suspect he’s buried somewhere in Marlboro County, but his grave has yet to be found.