Lottie was born on 19 Nov 1879 in Montgomery County, Maryland. She was the fourth child born of the five children her parents had together. Her father had two other children with his first wife, Fannie’s older sister, Laura.

Daughter of a successful man

Lottie’s father was a successful store owner in Barnesville, Maryland, and his family enjoyed the fruits of his labor. Lottie was only 10 when he passed away, but her mother continued running the successful store and the family continued to live as part of ‘society’ in Frederick, Maryland and northwestern Montgomery County, Maryland.

I found many newspaper clippings about Lottie visiting friends and family in Frederick and in Baltimore during her teens and twenties. She chummed around especially with two girls, Lillie TYSON and Grace CASTLE, both of Frederick. She also vacationed in Atlantic City one summer. 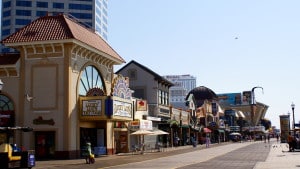 In the 1900 and 1910 census records, Lottie lived at home with her mother and older brother Percy Lee PYLES. The family had a cook and servants. No occupation was listed for Lottie in either of these census years even though she was 21 and 31 in those census years.

Finally gets a job

In 1914, Lottie became a postmaster, probably at the family store. She was 35 years old. In 1918, her brother Percy was living in Baltimore and working as a conductor on a railroad instead of working at the store. I’m not sure who was running the store at this point.

Fannie, Lottie’s mother, passed away in 1919 when Lottie was 40. In 1920 Lottie was living with her sister, Annie Estelle PYLES WHITE (1861-1926) and Annie’s family. Lottie was still the postmaster at the store as well.

Lottie seemed to have inherited a handsome sum since her home in Baltimore was the Northway Apartments, ‘one of the cities’ most stylish and pedigreed addresses’.

In a 1994 article from the Baltimore Sun, the Northway apartment building was described as having a grand and spacious lobby, elevators with hands that move in a half circle, art deco light fixtures, and plaster motifs in the public restrooms. See full article here. Here is a link to the googlemaps street view: Northway. Take a look. It’s still beautiful.

Lottie died 10 July 1956 at 77 years of age. She is buried in Moncacy Cemetery in Montgomery County, Maryland, along with many other members of the Pyles family.