Edmund Griffin GRANT, who went by Ed, was the son of Jesse Lee GRANT (1873-1931) AND Mattie Lee PEELE GRANT (1886-1960). Ed had two older sisters, Mabel and Ella, and a younger brother named Doug.  Ed and my grandmother, Florrie THOMAS MARTIN, were first cousins making him my first cousin twice removed.

Ed was born in Chesterfield County, South Carolina on 2 Jan 1909. He spent his growing up years in McFarlan in Anson County, North Carolina, and in Darlington, South Carolina.

In 1931, Ed married Anna Wilkinson BRUNSIN. He was 22 years old. Soon after he went to work as a salesman for the Franklin National Life Insurance Company.

In 1940, Ed and Anna and their two children, Adelyn and John, were living at 313 Augusta Street, West Columbia, Lexington County, South Carolina. Ed was still selling insurance.  Here is a link to the Augusta Street neighborhood where they lived.  Same houses, I’m sure.

Ed was promoted to state manager of sales for the Kansas City Life Insurance Company. I don’t know when he went to work for them.

In 1958, when Ed was 49, he was elected to represent Richland County in the South Carolina House of Representatives as a Democrat. He was re-elected six times and served a total of 14 years. He was a vocal member of the House and was named in the paper again and again concerning legislation he worked on.

The Aiken Standard reported in 1972 that Ed wouldn’t seek re-election because he wanted to devote more time to his family, especially his grandchildren. Ed was 63 years old. 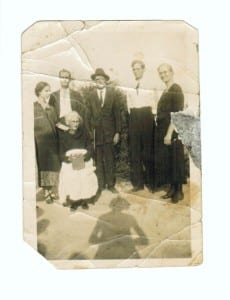 Ed didn’t get much time with his grandchildren, though, because be passed away the next year on 9 Feb 1973. I couldn’t locate a death certificate for him, so I don’t know what he died from. I suspect it was either a heart attack or a stroke based on other deaths in the family.

I never met Ed, but I did meet his brother, Doug, when Doug was an old man. Doug was tall, probably 6′ 4″. I’m told by another relative who knew them both the Ed was taller than Doug. In the photo I posted with the two of them and their wives, Ed looks to be quite a bit taller than Doug. Their father, Jesse, was much taller than his siblings in the only photo I have of Jessie with his siblings, so Ed and Doug must have gotten that from him.

Click here to subscribe to my nearly weekly newsletter and receive a free e-book, Write Your First Life Story Today
« What to ask the older generation
52 Ancestors Week 34 – B.H. Hatcher, Officer Down »