Thornwell had an average upbringing in Chestefield County. He attended school and learned to read and write. He had an older sister named Lillie Belle. There had been another sister born before him, too, but she died before he was born. Also a brother and sister were born after him, but they both died as infants.

In the 1910 census, when he is 20 years old, he is farming for his father. I don’t know what they were growing, though. Thornwell joined a fraternal organization, the Woodmen of the World. I couldn’t find much on what this organization did in the time period when Thornwell was a member.

In 1917, Thornwell registered for the draft for World War 1. According to his draft registration, Thornwell was tall and slender with light brown eyes and black hair.

On 14 July 1918, he was called to report for duty. He was part of the A.E.F. – the American Expeditionary Forces. The A.E.F. fought in France alongside the French and British in the last year of the war. It was trench warfare. 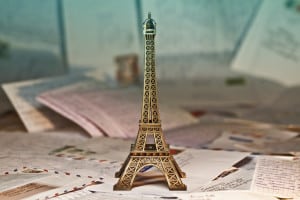 On 20 Dec 1918, Thornwell was killed in battle. His body was returned to his parents, and he was buried at Mount Olivet United Methodist Church Cemetery in Chesterfield County, South Carolina, were many of my Grant family is buried. 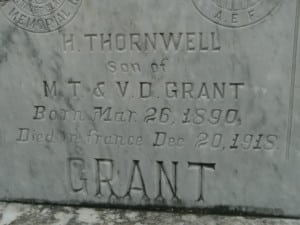 When researching Thornwell, I came to feel sad for Mallie and Babe. They’d had five children, lost three as babies or toddlers, and then lost Thornwell when he was only 28 years old. Lillie Belle married and had children, and outlived both her parents. Surely Mallie and Babe cherished Lillie Belle and her family.