Zack was a farmer from the time he was a boy. In the 1900 census, he is living in Cheraw with his mother and is farming. In 1907, when he was 26, he married Catherine Henrietta GRIFFIN, the daughter of Henrietta GRIFFIN who was killed in a tornado in 1884.

In 1910, Zack continued to farm in Chesterfield County. Zack and Kate’s household consisted of Zack, Kate, Ethel, and Herbert Thomas (Zack’s nephew). Herbert worked on Zack’s farm. Herbert’s family had moved to Richland County, South Carolina a few years earlier, and Herbert stayed on to work the farm with his uncle. 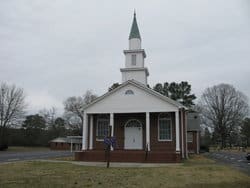 Zack and Kate’s family grew with the birth of nine children over the years. One of the children, Odessa, was born and died in 1916. She died of meningitis following a bout of bronchitis. She is buried at Pleasant Hill Baptist Church in Chesterfield County according to her death certificate. The land for the church had been given by Zack, but I don’t know when exactly.

In the 1920 and 1930 census records, Zack and Kate are still farming. They own their land free and clear. They were still raising kids, though. Their youngest, William Griffin GRANT, was born in 1925 when Zack and Kate were 44 and 43.

In the summer of 1936, Zack became ill with his heart. He suffered for about a month with endocarditis, an inflammation of the heart. He passed away on 18 Jul 1936 at the age of 57. He is buried at Mt. Olivet United Methodist Church in the Teal’s Mill area of Chesterfield County. 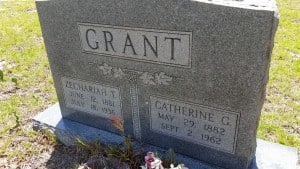 Zack was a generous man.  He raised Kate’s daughter as his own; he boarded his nephew who worked for him, and he donated land for a local church.