James Lewis LAMBRIGHT was the son of James L. LAMBRIGHT and Georgianna HEISER LAMBRIGHT ESTERLY. Lewis, as he was called, was born 15 May 1889 in Frederick, Maryland. His grandfather was Daniel Christopher HEISER who I wrote about last week. Here’s a link to that blogpost: Daniel C. Heiser   This makes Lewis my 1st cousin, twice removed.

Lewis had five siblings, the last of which was born in 1894. I don’t know what happened to Lewis’ father, but his mother married Harry ESTERLY in 1897. Georgianna and Harry didn’t have any children together. 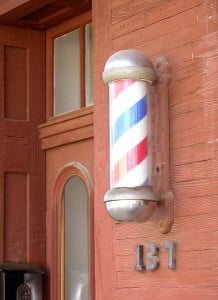 A quiet life no more

Life was likely quiet for Lewis until he had to register for the draft in June 1917. His draft registration says that he was single, living at home, and working as a barber. He was of medium height and build, and had light brown eyes and dark brown hair.

According to Maryland Military Men, Lewis committed suicide on 1 Dec 1918 by poisoning himself. The listing also says he served honorably.

Perhaps Lewis was injured and saw no chance of recovery. Perhaps he had lost a limb or two and didn’t want to live that way. Perhaps he was shell-shocked and out of his mind. I don’t know for sure where he died either…Europe or back home. Lewis is buried at Mt. Olivet Cemetery in Frederick, Maryland.

Sometime between his draft registration and when he left for the war, Lewis married Annie Elizabeth WICKHAM. They lived at 521 N. Bentz Street, around the corner from his mother and stepfather. Here’s a link to that house as seen from googlemaps:  521 N. Bentz Street, Frederick

I don’t know any more about his wife beyond her name. As far as I know, they had no children.