Red was my first cousin, once removed.  His mother, Virgie, and my grandfather, Joel Daniel MARTIN, were siblings.

Red and his older brother, Bobby, were only three years apart in age.  They probably chummed around together often.

On 10 February 1946, Red and Bobby went off playing in the woods as kids would do. As they meandered around, they found an old jar with moonshine in it.  Red drank it and became very ill.  Bobby helped him home. 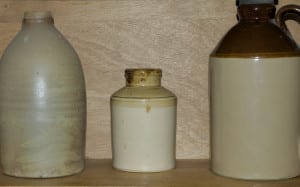 Virgie took Red to an old doctor in Elgin, South Carolina who said to take him home and keep him warm which she did. 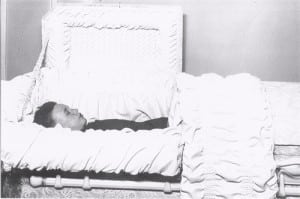 Red Peake in his casket

When they got the hospital, the doctor examined him and said he was ‘dead as a doornail.’  He had died enroute to the hospital.

According to the death certificate, Red died of alcohol poisoning.  It says he drank ½ gallon of corn whiskey.  Also, a contributing factor was exposure to rain for 6 hours.

Such a sad story.  He was just a little boy.

Special thanks for Elaine Davis LaValley, granddaughter of Virgie, for telling me this story.