Josiah CUSHING, Jr. was my first cousin thrice removed on my father’s side. His parents were Josiah CUSHING, Sr. (1828-?) and Elizabeth LITTLE (1829-?). Josiah was born 15 June 1861 in Franklin, Carroll County, Maryland. He was one of six children born to his parents.

In 1880, the census shows Josiah being a laborer and living with his parents in New Windsor, Carroll County.

Josiah married Susannah Temple McQUAY on 2 Aug 1883. Josiah was 22 when they married. The couple moved to Baltimore where Josiah worked as a truck driver. 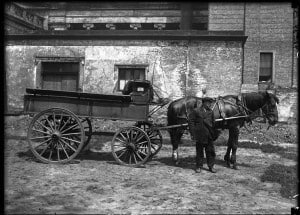 You’re probably wondering what kind of truck was he driving in the 1880s? Basically it was a long, horse-drawn wagon. They were used to haul goods.

When Josiah was 26, he and Susannah were living in the first block of S. Conkling Street in Baltimore.

Could be the same houses as when Josiah and Susannah lived there.

On 7 Oct 1887, Josiah was driving his truck near Sparrows Point, Maryland. Josiah had come up on a truck that was stopped at a railroad crossing. The stop signal had already been given according to the newspaper account. 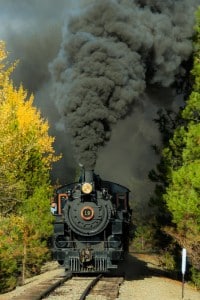 Josiah went around the stopped truck and onto the crossing. His truck was hit by a Pennsylvania railroad train. Josiah was killed.

He was buried back in Carroll County at Ebenezer United Methodist Church Cemetery in Winfield. His widow, Susannah, remarried after a few years and went on have a family with her second husband.