Pearl May LAMBRIGHT was the oldest child of James L. LAMBRIGHT (?-1897) and Georgianna M. HEISER (1855-1950). This makes her my first cousin, twice removed on my father’s side. Pearl is also the sister of Lewis LAMBRIGHT who I wrote about here: Lewis Lambright

Pearl was born in January 1884 in Maryland, probably in Frederick. Three siblings were born after her. Pearl’s father, James, died in 1897 when Pearl was about 13. Pearl’s mother, Georgianna, married Harry E. ESTERLY soon after James’ death.

The Perils of Pearl

In 1900, at age 16, Pearl worked as an operator at a hosiery mill. I can’t find her in the 1910 census, but in 1912 she quietly married Elmer HENSEL in Frederick. Did they quietly marry because she was pregnant? Could be. There is no record of her having a child, so that is pure speculation.

Here’s the story according to The Frederick Post and The News:

At about 1 a.m. on June 13, 1913, Pearl (named as Lambright and not Hensel) drank carbolic acid and was shortly after discovered by her husband, Elmer, who sent for a doctor. Dr. U. G. BOURNE came and attended to her for several hours. She regained consciousness about 7 a.m. and was able to speak coherently by 10. Pearl denied she took the poison herself but that it had been given to her. Her mother and others claimed that she was given the poison, too.

Link to 104 E. Sixth Street, where Pearl and Elmer lived. It’s the smaller part of the blue house.

Drinking Too Much Can Be a Good Thing

Dr. Bourne said that if Pearl survived the poisoning it may be because of the ‘antidotes’ which she drank before the poison – alcoholic beverages and lots of them. The doctor believed the alcohol counteracted the poison. 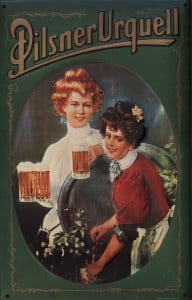 A warrant was sworn out for Hayes MEISLING (1881-1944) who was alleged to have been around the night before. Supposedly he’d also been in a fracas with Pearl’s husband who had a swollen jaw and a badly lacerated thumb that was bitten through to the bone.  Also, it was believed that Pearl’s stepfather, Harry, was assaulted in the fracas as well.

There was nothing more in the paper about the incident or the assault charges against Meisling. Pearl survived the poisoning but life still had chaotic moments like in 1916 when she was fined for disorderly conduct. She was named as Pearl Lambright instead of Pearl Hensel in this case, too.

In 1917, Pearl was living in Harrisburg, Pennsylvania with Hayes Meisling, the man who supposedly assaulted her husband and stepfather. In 1918, Elmer was granted a divorce from Pearl, and in 1919 Pearl and Hayes married. Pearl was 35 years old.

In 1920, Pearl and Hayes moved back to Frederick to live temporarily with her mother and stepfather. Hayes worked as an insurance salesman and soon he and Pearl moved to a home of their own in Frederick at 510 Fairvew Ave.

Hayes continued working as an insurance salesman and life was calm for Pearl and Hayes, at least as far as I can tell. Pearl’s stepfather, Harry, passed away in 1934 and Georgianna came to live with Pearl and Hayes. She appears with them on the 1940 census. In 1940, Pearl was 56.

Hayes Passes Away, Then Pearl

On the evening of 28 Dec 1944, Hayes died suddenly from a heart attack. He was 63. Pearl continued living in Frederick until 1945 when she sustained a fractured femur, the large bone between the hip and the knee. At that point she went to live with her sister, Ada LAMBRIGHT CUDDY, in Harrisburg, Pennsylvania.

Three years later, on 6 May 1948, Pearl passed away at age 64 from chronic myocardial degeneration, pulmonary edema, and chronic nephritis. The autopsy says they were all secondary to an untreated fracture of the femur and bed confinement because of the fracture. I don’t understand why the fracture was left untreated. That part doesn’t make sense.

Pearl’s funeral was held in Frederick, and she was buried at Mount Olivet Cemetery in Frederick. Pearl’s early adult life was a mess, but she seemed to have found stability with Hayes. 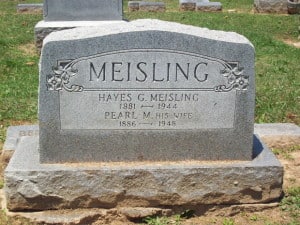