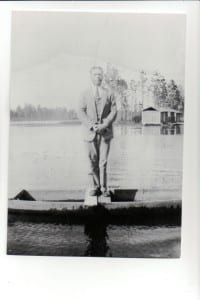 Amory was born 8 May 1905 into a farming family, the third of six children. The family lived in Chesterfield County, SC, having a Cheraw address. Amory attended school according to the 1920 census and could read and write.

On the 1930 census, Amory was living with the family and working on the farm.  He was classified as “unpaid worker, member of family.”  The Depression had begun so everyone was pulling together to keep people fed, etc.

On 10 March 1933, Amory started with abdominal pain.  Perhaps it started subtly and was reckoned to be gas or something he ate.  On 13 March, Amory was diagnosed with peritonitis.  Two days later, he had an appendectomy and drainage of his abdomen.  Sadly, it wasn’t enough.  On 17 March, Amory died. 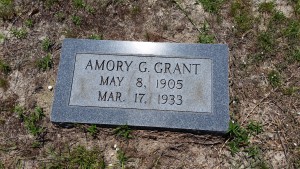 The personal information on the death certificate was provided by his older brother, Reverend Daniel Grant.  Even though Amory’s parents were both living, they were probably too distraught to deal with these details.

Amory is buried at Mt. Olivet United Methodist Church in Chesterfield County, the location of many of the Grant family.