Goldie and Dan lived in Dickerson, Maryland (Montgomery County) at the start of their marriage and moved to Washington, DC in 1915. They had three in a short order:  Charles Leroy in 1913, Dorothy V (Dot) in 1915, and Mary Helen in 1917.

Goldie died on New Year’s Day 1919 from the Spanish Flu. She was in the hospital for six days before she passed.

Her burial didn’t happen for a week.There were so many victims of the flu that caskets couldn’t be made quick enough for earlier burials, and the ground so frozen they couldn’t dig the graves any faster. She was buried in an unmarked grave in Congressional Cemetery in Washington, DC.

My father’s only memory of his mother was seeing her dead, laid out on a couch at someone’s house. He remembered someone saying, “There’s your mother,” as they pointed to her. And he remembered that she had dark hair. He was only five when she died.

My dad had traveled to see his deceased mother with his maternal grandparents and he left with them, too. He told me he believed he had been staying with them before his mother passed, but he wasn’t sure about that.  The Spanish Flu was heavy in Washington, DC, so perhaps he had been sent to stay with his grandparents in Frederick to get him away from the flu. He never asked so we’ll never know.

Discovering a likely photo of Goldie

When going through the belongings of Goldie’s first cousin Myrtle Virginia Hillard Burroughs (1903-1977), I found a locket with a photo of a young woman with dark hair.  The face reminded me of Goldie’s mother and Goldie’s daughter, Dot.  Myrtle and Goldie were close even with the age gap, so I concluded the photo is of Goldie. 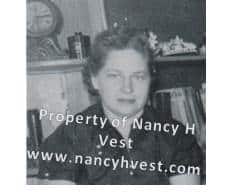 I never knew this grandmother, but I knew my dad’s sister, Dot, and I heard stories about Goldie’s mother. Both were tough, determined, spirited, and loving. I have to believe Goldie probably was, too.