I was able to find out a lot about my 3rd great-grandfather, Renatus/Rhenatus Thomas.  With a name like that, there weren’t that many records to sift through.  Plus my grandmother remembered his name and his wife’s name and all his children’s names.  Easy peasy.

According to notes prepared by two of Renatus’ sons (George Washington Thomas and John Thomas) in February 1922:

Billy Thomas, Jr. was a carpenter and mill-wright by trade.  He set out on a western trip in quest of better business conditions, but when he reached the vicinity of Jackson Creek [Richland County, South Carolina] he had to strike camp for several weeks on account of the illness of his little son, Rhenatus.

The lad did not improve in health sufficient to warrant his father in resuming his trip westward, so he began to do carpenter work in the neighborhood and as favorable were the conditions for employment, that he gave up all the thoughts of journeying westward and settled for life at the present site of the old Thomas cemetery.  However, Billy Thomas himself is buried in the old Medlin Cemetery, near an old oak tree (now dead).

He also built the old Joel Medlin house which is still in use as a dwelling.  Thus it was thru fate and disappointment of Billy Thomas, Jr. that the present Thomas generation became Southerners instead of Westerners. Rhenatus Thomas was born near Wilmington, NC.  [According to census records, though, Renatus was born in South Carolina circa 1799.]

You’d think with knowing all that would make it doable to find the Billys.  Not so. In fact several of my distant Thomas cousins and myself have looked for records in Maryland, North Carolina and South Carolina and really can’t find much of anything about the Billys.

We don’t believe Billy Sr was French, but that he was on a ship that left from France. There is a Renatus Thomas in Maryland at the time that the Billys would have been there, and with an uncommon name like Renatus you might think they are related.  Still, none of us have found any connection between that Renatus and the Billys or our Renatus. 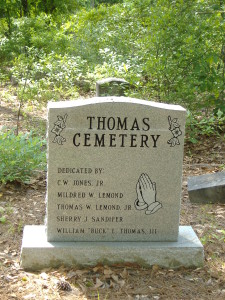 I do know the location of the old Thomas Cemetery.  Some of the Thomas family is buried there.  Some broken stones exist, too, probably belonging to Renatus and his wife. 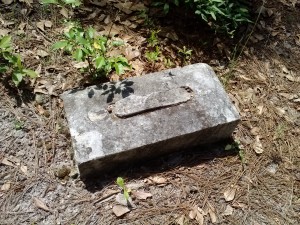 I’m pretty sure of the location of the old Medlin Cemetery, too, but the area is densely wooded and the cousin who checked it out didn’t find any stones at all.

For now, the Billys remain elusive.  I am leaving that mystery for my descendants to solve.