My grandparents, Daniel and Florrie MARTIN, were tenant farmers. They farmed on several farms after they left South Carolina, mostly in Virginia.

They never knew what kind of house they would encounter when they arrived on a new job. I remember my mom, Gladys MARTIN HEISER, telling me about arriving at one house that had no electricity or indoor plumbing. Her mother sat on the front steps and cried. My mom didn’t know why her mother was so upset until they started the daily rituals of filling lanterns, trimming wicks, and getting water from a pump well.

The following house story is one my mom told many times:

Blood on the Stairs 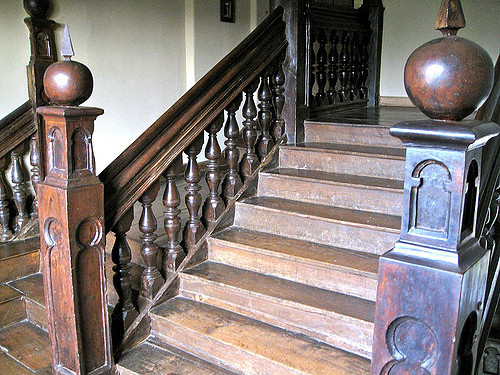 The stairs with the blood stains were bare wood like these. Photo by Xenboy. https://www.flickr.com/photos/crazybiker/ Click on photo for link

One of the houses my mom and her family lived in near Winchester, Virginia, had blood stains going up the stairs and down the hall to a locked closet. Florrie tried to wash the stains up. She said it had to be human blood since it wouldn’t wash up. Animal blood would come up from wood, but human wouldn’t, according to Florrie. 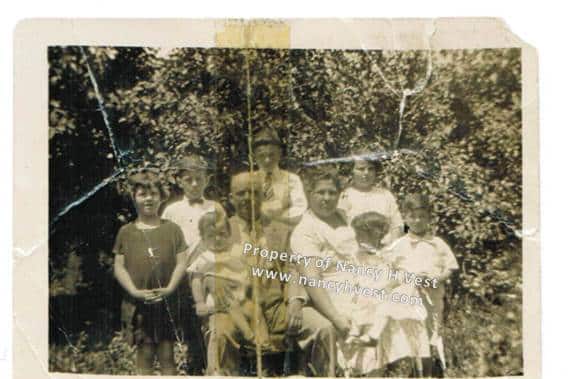 Daniel and Florrie with seven of their children a few years before the closet incident. Chet and Carlisle are standing in the back, Carlisle is the taller of the two.

Well, this intrigued two of my uncles, Chet and Carlisle, who were young teenagers. Chet and Carlisle had a hot and cold relationship. Carlisle, being the oldest, was bossy toward all his siblings; and he really got under Chet’s skin sometimes. When it came to the blood on the steps and the locked closet, though, they were of the same mind.

Chet and Carlisle often mentioned the blood on the steps and what might be behind the door. Daniel told them repeatedly it wasn’t any of their business since it wasn’t their house. That would shut the boys up for a while. 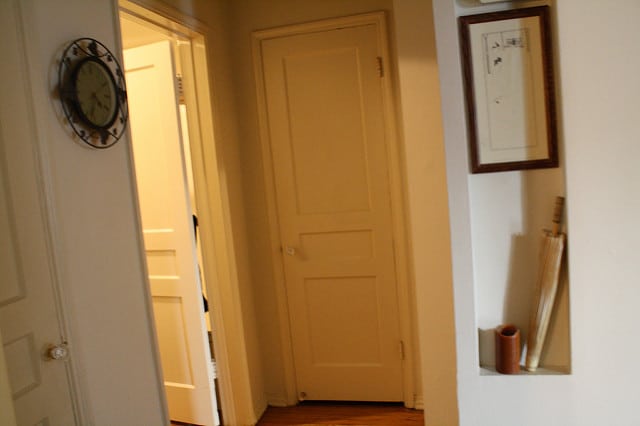 Did the hallway look something like this? Maybe. Photo by Megan Rosenbloom. https://www.flickr.com/photos/abinka/ Click photo for link

One day, though, their curiosity got the best of them. The two probably worked each other up, and they determined it was time to find out what was in that closet. They were going to open that door no matter what it took.

Florrie intervened and told them no. She stood her ground against her teenaged sons, but they kept on. Their plan was to pry the door open or break the lock or chop the door down, akin to that scene in The Shining.

The tension escalated quickly, and finally Florrie sent for reinforcements. “Jerry,” she said. “Go get your father.” Jerry, another of my uncles, disappeared in a flash.

Now, Daniel was none too happy being summoned back to the house for this. If his strong-willed and capable wife needed help, then those boys were way too full of themselves and were in need of a whuppin’.

As Daniel approached, he heard the boys arguing with their mother, saying that since they were living in the house, they should know what’s in the closet; and that they were getting in there one way or another. Daniel entered the house to find my mom and Ruby, my mother’s sister, tending to the young ones while Florrie held off Chet and Carlisle upstairs in the hallway.

I imagine Daniel was as angry as this lion by the time he got to the house. Photo by Alexander Steinhof. https://www.flickr.com/photos/bagger2009/ Click photo for link.

“Carlisle! Chet!” Daniel’s voice boomed. The house became quiet for a few moments before the slow march of the boys began. They glanced back at the closet through narrowed eyes. Their nostrils flared as they tramped down the stairs.

And that was the end of that

“I’ve told you and told you!” Daniel said. “This isn’t our house. That closet is locked for a reason. And if we were supposed to go in it, we’d have been given a key.”

“No. Now you boys go out to the shed. I’ll be out there in a few minutes.”

After that day, no one spoke of the blood on the steps or the locked closet again. The closet remained locked, and the family never knew what was behind the door.

Was my grandma right about human blood stains on wood?

I did some research, and I can’t say yes or no. But even if it was animal blood going up to that closet, Chet and Carlisle probably would have been just as curious about what was locked up in the closet.

Click here to subscribe to my nearly weekly newsletter and receive a free e-book, Write Your First Life Story Today
« Florrie and the cure for the itch
Florrie saves Jenny’s life »