Note: quoted sections of this story are my dad’s words from notes taken over the years 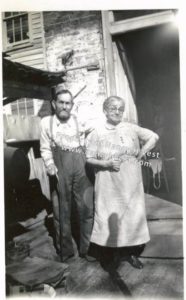 Montgomery and Sally Price, my great-grandparents who raised my dad

Charlie, as my dad was called, attended the Church Street School at 115 East Church Street in Frederick. (Click on the words for a view of the building nowadays.)  The school was about half a mile from his home with his grandparents at 321 N. Bentz Street.

One of the teachers at the Church Street School, William L. BROWN (1890-1969), wore thick coke-bottle glasses which made his eyes look huge. The kids nicknamed him Froggy Brown. Of course they only called him that behind his back, but I expect Mr. Brown knew of the nickname.

Charlie was a smart kid, both in brains and quickness with words and comebacks. Mr. Brown was promoted to principal.  My father often ‘visited’ the principal’s office during his years at the school. Here’s a few of the stories Dad told us about him and Froggy Brown.

The Arrow and the Song

One time, Charlie’s teacher assigned the students to memorize and be prepared to recite a poem by Henry Wadsworth Longfellow. A few days later, the recitations began. Charlie recalled that many students recited long poems like “The Song of Hiawatha.”

When it was Charlie’s turn, he stood up and recited “The Arrow and the Song,” a simple 12-line poem. (When dad would tell this story decades later, he could still recite a good bit of the poem.)

The teacher admonished Charlie for choosing such a short poem. She basically called him a slacker. Charlie answered with some smart-aleck comment about her not saying how long the poem had to be.

Off Charlie went to see Froggy Brown, who laughed about Charlie’s ingenuity before reminding Charlie he needed to be respectful to his teachers.

Charlie’s family was poor as was everyone in his neighborhood. They lived “in the fringes of the wealthy neighborhoods.”  Their house, a tiny row house, had no indoor utilities. They had nothing to sell to get money; they simply “didn’t have much.” 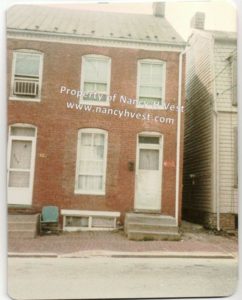 On the right by the alley, 321 N. Bentz Street, Frederick, Maryland. This is where my dad grew up.

Charlie found a coin at school one day. He didn’t tell me what denomination the coin was, but it was enough that it caused a ruckus at school. Other kids at school said he stole it, and enough of an argument broke out that Charlie was sent to see Froggy Brown.

My father had been to the principal’s office enough that the principal knew him well, and knew he didn’t steal the coin. After a bit, Charlie was sent back to class and the ruckus died down.

Church Street School went through seventh grade. After that, students attended high school. Most students stopped school at the end of sixth or seventh grade.

Charlie was smart and good in school, so he attended seventh grade, but he knew he wouldn’t go any further because he and his grandparents were starving to death. Charlie was 14 at the time.

When Froggy Brown heard this, he called Charlie to his office. The man begged my Charlie to stay in school. He told Charlie that he was smart enough to finish high school and even attend college.

My father remembered that Froggy Brown was crying because he was so upset that my dad was quitting school when he had so much potential.

Charlie told Froggy Brown that he had to quit school because his family was starving, and he needed to get a job. He also told the principal that he didn’t even have money for shoes and was having to go around barefooted all the time.

Froggy Brown sighed as he realized there was no way to keep Charlie in school.

At the end of the school year, Charlie and Froggy Brown parted ways, but Charlie always remembered the things “Ol’ Froggy Brown” said to him and how the man saw brains and ability in a young man from a poor family.

When Dad talked about Froggy Brown, his eyes would light up like when remembering an old friend and the good times. 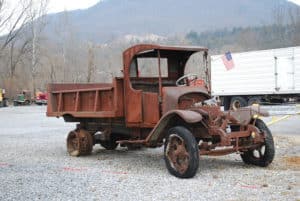 1920’s era truck, probably like the one my dad drove on his first job. Photo by Tom VanNortwick. click on photo for more info.

My dad’s first job after school was driving a truck, earning $3 for a 10-hour day of work. His grandfather worked where he could find work. His grandmother kept house because “women didn’t work in those days.”

William L. ‘Froggy’ Brown continued as a principal in Frederick County Schools until his retirement.

Click here to subscribe to my nearly weekly newsletter and receive a free e-book, Write Your First Life Story Today
« Grandma, chocolate, and me
The chaos of Hurricane Camille »