A few weeks back, the prompt for 52 Ancestors in 52 weeks was COLOR. Here’s my story, better late than never.

There are no colorful names in my family or anyone that I really consider to be a colorful character, but there were (and still are) a lot of artistic people in my family. My mom, Gladys MARTIN HEISER (1921-1999) was one of them.

I have many black & white photos of my mom taken during WW2 when she was a government girl in Washington, D. C. One in particular has her in a blue sweater; the sweater in the photo was obviously colored. Several relatives have copies of this photo, all colored with the same blue color. There are a few other colored photos, too. I often wondered who colored them. 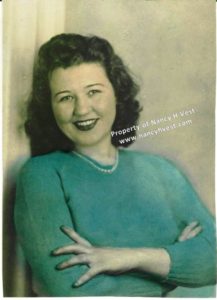 A 2013 conversation with my cousin, Rose Marie GANUS WARD (1941-2015), likely uncovered that mystery. I mentioned the blue sweater photo to Rose. She told me my mom used to color photographs.  Rose had a black and white photo of herself, and mom colored a few of them for her, making the dress a different color in each one.  Rose also said that Mom was really good at coloring photos.

Recently another cousin sent me some photos from his recently deceased mother’s house. One of them is a colorized photo of Rose and her mother, Ruby MARTIN RUHLING (1919-1977), when Rose was a little girl. Ruby was my mom’s older sister. I wouldn’t be surprised if my mom colored that one, too. 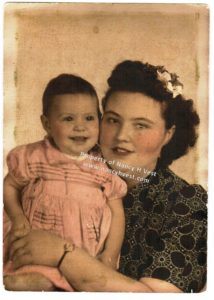 Click here to subscribe to my nearly weekly newsletter and receive a free e-book, Write Your First Life Story Today
« The Musical Martins
Saving Stories Much Too Good to be Lost »