Curtis’ great-grandmother, Angeline GRANT JACOBS, was a sibling of my 2nd great-grandfather, D.B. GRANT. This makes Curtis my 3rd cousin, once removed.

I couldn’t find this family in the 1930 census. The 1940 census reports them living in Murrells Inlet, Georgetown County, South Carolina. They lived there in 1935, also.

In 1940, Lonnie worked as a laborer for the W.P.A. Mary was a homemaker, and the children attended school. Curtis was in 10th grade. In 1941, the family moved to Charleston, South Carolina. Curtis became a welder at the Charleston Navy Yard. 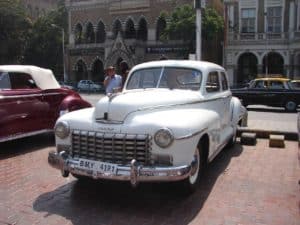 A car of that era. Photo by Nagraj Salian. Click on the photo for his flickr.com page.

Life was probably exciting for Curtis. He was born just a few years after my mom, and I heard many stories about her life during the war. Swing dance and big bands were the rage, and young people were living life as if they had no tomorrow due to the constant worry of the war hanging over their heads.

It all came to an end for Curtis in October 1943. On Monday, October 25th, shortly before dawn, Curtis and three coworkers from Navy yard were on their way someplace. Considering the time and day, they may have been on their way to work after spending the weekend out of town. Curtis never made it to his destination.

Near Monck’s Corner, South Carolina (about 33 miles north northwest of Charleston), ‘a carnival truck and an automobile collided.’ The driver of the truck and two occupants of the car died at the scene. Curtis and the other car occupant were taken to Berkeley County Hospital.

Curtis died early the next morning, October 26th, from a fractured skill and intracranial hemorrhage. He was just 18 years old. So sad.

I’m not sure where Curtis is buried. His death certificate says Collins Creek Baptist Church in Myrtle Beach, South Carolina. I didn’t find him listed there. He isn’t listed with his parents and brother at Belin Memorial Cemetery in Murrells Inlet either.