Earl PRICE, the oldest child of Lawrence S. PRICE (1883-1941) and Georgia TURNER PRICE (1893-1933) was born in May 1909 in Maryland. Lawrence was the brother of my grandmother, Goldie PRICE HEISER. This makes Earl my first cousin once removed.

On the 1910 census, Earl and his parents lived in Barnesville, Montgomery County, Maryland next door to Lawrence’s parents and siblings. Lawrence worked as a laborer at a stone quarry.

In 1920, the family was still in Barnesville but no longer next to Lawrence’s parents. Lawrence’s parents and siblings had moved to Frederick, Maryland sometime in the 1910’s. Lawrence still worked at a stone quarry. Earl attended school, and Georgia took care of the home and the younger boys.

The family breaks up

Early in the 1920’s, Lawrence and Georgia divorced. Georgia remarried and had five more children before her death in 1933. I have suspicions that Lawrence went to prison. I’m still working on that angle.

I don’t know much about Earl’s life in the 1920’s. I do know that in 1929, he and Harvey were living with their grandmother, Ida Turner, near Dickerson Station in Montgomery County. Linwood is nowhere to be found in the 1920 census, but he is found later. Why weren’t any of these boys with one of their parents who were both living? Good question.

Tragedy on a hot July day 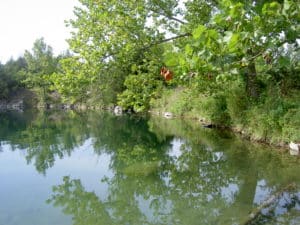 July in that part of Maryland is hot, usually around 90°, and humid. Just miserable. On Saturday, 13 July 1929, Earl and Harvey went swimming at an abandoned quarry pool.

The Frederick Post reported, ‘No one was present except the two boys. According to the younger lad his brother swam across the pool and started back. When about two-thirds of the way back he disappeared beneath the water. His body arose again to the surface and again disappeared.’ The newspaper article continues below: 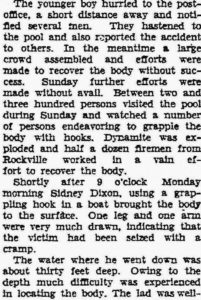 The final paragraph said ‘the lad was well known in the vicinity in which he lived. He was industrious and popular among a wide circle of friends.’

Earl’s funeral took place on Monday afternoon at his grandmother’s home. I was unable to find out where he is buried. How awful this must have been for Harvey and their grandmother.