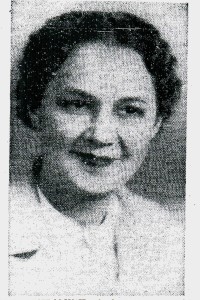 Her young life in Columbia

Gertrude, a lifelong Columbia, South Carolina resident, was born 16 May 1913. Gertrude’s family belonged to Edgewood Methodist Church and lived in the Edgewood area of Columbia. Gertrude attended Edgewood School and graduated from high school. In her school years, she was active in the school’s minstrel programs.

As an adult, Gertrude remained at Edgewood Methodist. She and her sisters belonged to the Young Women’s Auxiliary at the church. They were named a few times in the paper for community work the young women did.

Although I didn’t find Gertrude in the 1930 census records, I found many city directory listings for her. In the early 1930’s she lived on Two Notch Road in Columbia with her parents and some siblings. 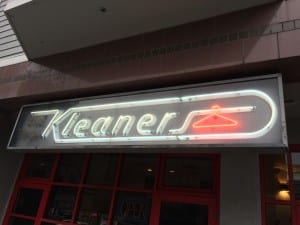 Gertrude goes to work and gets married

After her father passed in 1936, Gertrude continued living with her mother and other family members including some of her sibling’s spouses and their children. It was the Depression, after all, and many homes were generational. Gertrude worked during the Depression years at H&S Cleaners. She was a seamstress and a checker.

In 1939, Gertrude married Frederick SMITH, a grocery store salesman originally from Kentucky. In the 1940 census, Gertrude and Fred are both 27 and both employed. They were also living with Gertrude’s sister, Arizona, Arizona’s husband and children, her mother and some of her siblings. They were living on Two Notch Road. In 1941, Gertrude and Fred are still married, but that appears to change soon after.

In 1942 and beyond, Gertrude is listed in the city directory as Miss Gertrude Waites. I have no idea what happened to Fred, but I suspect there was a divorce since Gertrude went back to her maiden name. 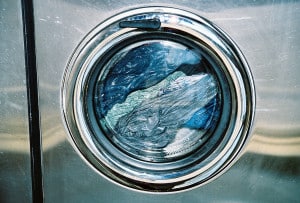 Gertrude continued working in the cleaning business through the 1950’s, going from clerk or checker to claims adjustor at Deluxe Cleaners and finally to the position of manager at the Edgewood Laundrette. When she worked at Edgewood, a few of her sisters-in-law worked for her. Deluxe Cleaners had a bowling team that completed with other community businesses. As social as Gertrude was, I can imagine she bowled on that team.

Life as a single lady

The last city directory entry for her is from 1956 when Gertrude was 43 years old. Through all the years in the directory, Gertrude lived on Two Notch Road. In fact, most of the family did and had addresses within a few house numbers of each other. Those addresses are now occupied by commercial businesses.

Edgewood Methodist split in the 1950’s from what I can tell, and the Waites family was instrumental in the founding of St. James Methodist. Gertrude was a member there. She was also a delegate for the Richland County Democratic Party in the 1950’s.

The passing of Gertrude and other family members

Gertrude and her mother continued living together as the 1960’s began. I wouldn’t be surprised if other family members lived with them. Gertrude passed on 18 June 1966 at 53 years of age. Her death certificate is not available for me to view until later this summer, so I don’t know the cause. Her obituary says she had been ill for several weeks. She is buried at Elmwood Gardens in Columbia. Many of her family members are buried there as well. 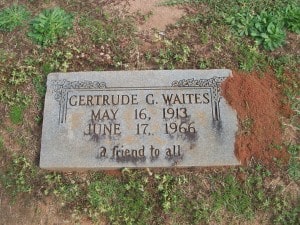 Gertrude G. Waites gravestone from Find A Grave page. Click on image to go there.

I am sure the Waites family was saddened by the loss of Gertrude. Throughout the years, this large family stayed in Columbia or close by. Many went to the same church, and they often shared the same abode. When Gertrude passed in 1966, the family had lost the mother (Mary) and a brother (Douglas) in 1963 and 1965, respectively. It reminds me of the 1970’s when my family lost several family members in just a few years’ time.