My grandma, Florrie THOMAS MARTIN (1894-1979), was diagnosed with diabetes before I was born. Grandma was pretty good about avoiding desserts like cake except on special occasions like birthdays, but she loved chocolate candy.

Her children would bring her dietetic chocolates instead of the real thing. She ate them sparingly. I don’t know if it was the taste (rich and yummy chocolate it was not) or her desire to make them last or wanting to control her blood sugar.

I had a sweet tooth for chocolate, too, which I suspect came from Grandma. Not completely genetically, though. 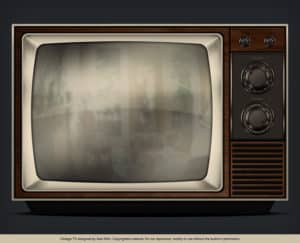 typical television of that time. photo from Alan Klim. Click on photo for more info.

Spoiled with chocolate (and stories)

Grandma lived with my family until she passed when I was 19. Whenever I was little and my mom would scold me and send me to my room, Grandma would come get me and take me to her room. I would sit up on her bed behind her recliner and watch her stories (soap operas) on her B&W TV while eating one of her dietetic chocolates. I was safe and secure. No wonder chocolate quickly became my go-to when I was upset or stressed.

I told this story to my mom’s cousin, Agnes. Agnes’ mother, Aggie THOMAS JEFFORDS (1897-1966), and my grandmother were sisters. Agnes said that Aggie did the same thing to Agnes’ youngest son whenever Agnes scolded him and sent him to his room. 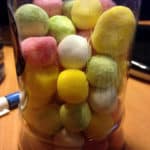 Grandma, the older me, and chocolate

When I was older, Grandma would send me to the five-and-dime to get yarn. She always gave me enough extra to get her a Mounds bar, but I wasn’t to tell my mom about it. I guess I was Grandma’s chocolate dealer.

I was 19 when my grandma died. She was in the hospital with complications from her diabetes. We thought she was getting better, but she had a heart attack and didn’t make it. She was 84.

I worked at a store in a mall at that time. Across from the store was a Woolworth’s. My first day back at work, I made repeated trips to Woolworth’s for candy bars. Ones with chocolate, of course. I remember eating several candy bars that day. It made me feel better for a short time, like I was safe and secure. 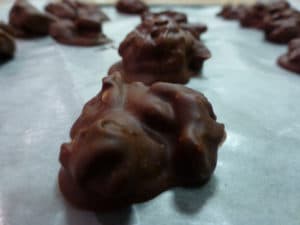 Chocolate and me now

Chocolate isn’t my comforter anymore. I’ve found healthier ways to deal with stress. But smelling chocolaty things brings back those memories of my grandma and sitting on her bed eating dietetic chocolates while watching her stories.

Click here to subscribe to my nearly weekly newsletter and receive a free e-book, Write Your First Life Story Today
« A. B. Martin’s unusual death
Charlie Heiser and Froggy Brown »