Green was born 15 Jun 1878 in Richland County, South Carolina.  His father was 65 when Green was born.  Green appears in the 1880 census living with his family in Richland County.  His parents were both on that census record, but I do not conclusively know what became of them after 1880. That’s research for another day!

I couldn’t find Green in the 1900 census, but I believe he was in Richland County because he was married to Frances Martha BRAZELL LEE in the 1910 census.  BRAZELL was a common family name for that part of Richland County.  In 1910 Green and Martha, as his wife was called, had four children. Green rented land and farmed it on his own account.  Green was about 32 and Martha 25.

In 1918 Green registered for the WW1 draft.  At that time he and his family lived in Edgewold. Edgewold was in the Two Knotch Road area of Columbia in Richland County.  Green was of medium height with a stout build.  His eyes were brown, and his hair was dark.  He was about 40 years old.

Two years later the census shows Green renting and farming on Two Knotch Road.  The census also showed that Green could read and write. Like most farming families, Green and Martha had a lot of children…eight of them at this point.  One more would be born the following year. 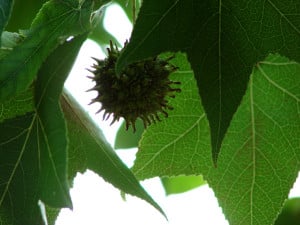 Green and the sweetgum tree

On the afternoon of 26 Feb 1925, 47-year old Green and his 18-year old son, Archie, went out to fell some trees. According to The State newspaper, ‘Both were sawing on a [sweet]gum tree. When the gum fell it struck a nearby tree and before Mr. Lee could get out of the way a limb from the standing tree broke off and fell on him. Young Lee declared that he shouted to his father to move, but before the man could dodge the limb had struck him.  Death was instantaneous.’   How sad for Archie to witness his father’s death and not be able to stop it. 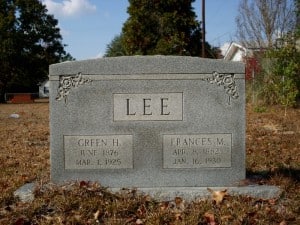 Green was buried at the Old Macedonia Cemetery on Fort Jackson. In 1959, the cemetery was moved to its current location on Old Percival Road in Columbia, South Carolina. The church, Macedonia Baptist, was rebuilt at this location as well.

Click here to subscribe to my nearly weekly newsletter and receive a free e-book, Write Your First Life Story Today
« Hollie Grant: A wife and then a widow
Gertrude Waites: An active single »