Harry was the oldest child of Lewis and Susan. Lewis worked as a mason and a farmer according to the 1850 and 1860 census records. No doubt Harry helped on the farm.

On 4 April 1865, Harry enlisted in the Union Army at 18 years of age. He served in Co. G of the 3rd Potomac Home Brigade of Maryland. The 3rd Maryland Home Brigade was assigned to the 1st Brigade, 1st Division, West Virginia.

According to his enlistment papers, Harry had gray eyes, brown hair, and a fair complexion. Also, he was a short 5 feet, 3 ½ inches tall.

Harry was discharged 29 May 1865 at the close of the war. He served a total of 55 days, and earned a $100 bounty for enlisting which was a large sum of money then.

It’s possible Harry was living in Baltimore in 1870 but I am not positive it’s him in that particular record. I do know that in 1880, he was farming in Taneytown with his wife of five years, Susan SHRINER HYSER, who went by Sue.

Harry and Sue had five children: Ira, Laura, Stearn, Eva and Bobby. Between Eva’s birth in 1882 and Bobby’s birth in 1889, the family relocated to Wellington, Sumner County, Kansas. I don’t know why they went to Kansas. Harry was in his late 30’s when they relocated.

Harry worked as a painter by trade according to his obituary in the Wellington Daily News. The obit also said ‘Mr. Hyser was a very generous, kind hearted man who had done many acts of kindness which had endeared to him many people who will mourn his loss.’

During his years in Wellington, Harry belonged to the James Shield Post of the Grand Army of the Republic (G.A.R.), a fraternal organization for those who’d served in the Union Army and Navy. Learn more about the G.A.R. here.

Harry was a successful painter. In the 1900 census, Harry owned his house free and clear. Also, he had a phone installed in his home in 1902. He was 52 then and he and his family lived at 303 E. Lincoln in Wellington. Here is a link to the area. His house appears to be gone, but the remaining houses give an idea of what kind of home he owned. 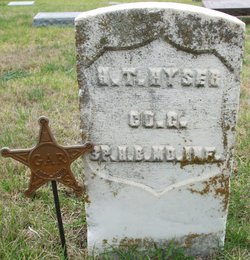 Harry’s gravestone photo from his Find A Grave page. Photo added by Donna Fitch. Click on image to visit his Find a Grave page.

A terrible sadness came to Harry and family when the youngest child, Bobby, died in an accident in 1903. I will write about Bobby in a few weeks.

In January of 1905, Harry became ill with dropsy. Dropsy is edema or swelling, often caused by congestive heart failure. He passed away at his home on January 15th of 1905. He was buried three days later at Prairie Lawn Cemetery in Wellington.

Click here to subscribe to my nearly weekly newsletter and receive a free e-book, Write Your First Life Story Today
« Tommie Lee – There and back again
Hollie Grant: A wife and then a widow »