Lula Devere MARTIN is my 2nd cousin, twice removed. She was the daughter of Hack MARTIN (1851-1932) and Charlotte HARRISON MARTIN (1854-1913). Her grandfather, William MARTIN, was the brother of my 2nd great-grandfather, Phillip MARTIN.

Lula was born in October 1887 in South Carolina. In 1900, she lived with her parents and siblings in Wateree Township, Kershaw County, South Carolina. Lula’s father was a farmer who owned his farm free and clear. Lula and her siblings attended school and all could read and write. 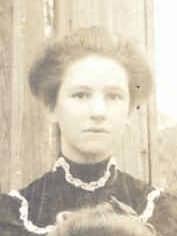 In 1907, when Lula was 20, she married Jesse Allen MARTIN, Jr. Jesse was her first cousin. They were married at the Edgewood parsonage by preacher Peel.

On 29 December 1907, Lula died. Below is the death notice from The State newspaper entitled Sad Death of Bride. 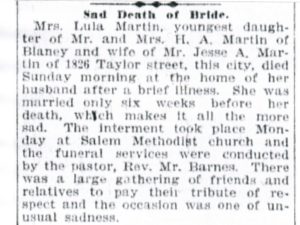 South Carolina didn’t issue death certificates in 1907. Two family versions exist about Lula’s death. According to someone in the Harrison family, Lula was cleaning house and swept a bullet into the fireplace. It exploded and killed her. The other family version claims she died of typhoid. Both versions are believable.

A special thanks to Glenna KINNARD, distant cousin and fellow Martin family researcher, for telling me the story of Lula and sharing photos of Lula with me.