Nettie’s father was a laborer all his life, but he was also the Justice of the Peace for Urbana. One of his many siblings was Sally PYLES PRICE, my great-grandmother, the one who raised my father after his mother died when he was five. I wrote about his mother, Goldie Isabel PRICE HEISER last year. I also wrote about William Wallace PYLES, Sr.

Growing up and getting married 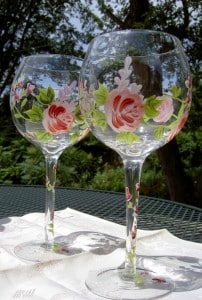 just some pretty glassware, not a family heirloom

Urbana is about 15 miles southeast of Frederick, Maryland. Nettie attended school there and was active in school clubs including a literary society. Urbana was rather rural, but the people there hosted many social events that Nettie and her older brother, Charles, attended. Events like Pound parties and lawn parties. When she was 19, she was active in the Ladies Aid Society. This was in 1925.

In 1930, Nettie lived with her mother and brother in Urbana. Her father was listed as a boarder in an adjacent community. I don’t believe her parents were separated. He was merely staying and working elsewhere instead of going back and forth. In 1931, when Nettie was 24, her mother passed away.

Between her mother’s passing and 1935, Nettie married Claud LENHART, also from Urbana. She and Claud raised Claud’s neice, Helen Marie GEISBERT. Nettie and Claud had a son in 1941 named Richard. Richard died in a sad, sad accident when he was six. You can read about it here if you haven’t already.

Life after Claud and Richard

Three years later, divorced Nettie lived alone in Frederick, Maryland at 18 Winchester Street. Nettie worked as a presser. I don’t know what broke up her marriage, but the loss of a child could do it. Or perhaps they were already on the outs before Richard’s accident and that just pushed it over the edge.

The following year, 1951, Nettie married Millard E. Barthlow, Jr, who went by Doc. Doc lived next door to Nettie at 20 Winchester Street. Click here to see the two houses. Nettie was 45, and Doc was 42 when they married.

Click here to see 18 and 20 Winchester Street. No doubt it’s the same houses.

Doc operated a grocery store before he married Nettie, and Nettie was quickly involved in the operation.

In 1954, they opened a new store in Araby, between Urbana and Frederick, and they moved to Araby, too. They sponsored many community events, and they often had ads about the store in the Frederick newspaper. The ads always gave both of their names as the proprietors. 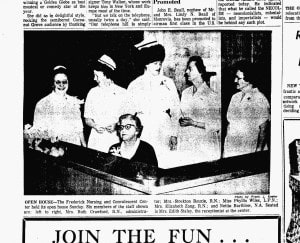 1965 Photo of Nettie and coworkers. She is standing on the far right.

By 1958, they had closed the store. Doc worked as an assistant field supervisor for Jenkins Bros, who ran a canning factory in Frederick County. The couple still lived in Araby, but eventually they moved back to Frederick.

Over the years, Nettie also worked as a practical nurse at the Emergency Hospital at Montevue and as a nursing assistant at Frederick Nursing and Convalescent Center. What led Nettie to be a nurse? Perhaps the way Richard died and Nettie being unable to do anything to help him made her want to help others.

Sickness and passing on

In 1972, at age 65, Nettie was admitted as a surgical patient at Frederick Memorial Hospital where she remained for two months. After she recovered she publicly thanked her doctors, and others, in the newspaper. 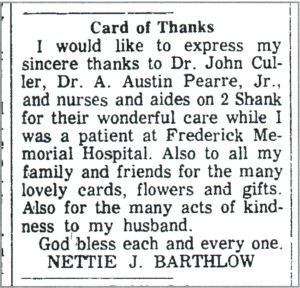 The following year, on 7 Apr 1973, Nettie passed away. She was remembered for her work as a nurse, for the business she and Doc ran, and for being a member of the Wesley Chapel United Methodist Church in Urbana. In Nettie’s obituary, her first husband’s niece, Helen, is listed as Nettie’s foster daughter. Nettie is buried at Mt. Olivet Cemetery in Frederick, Maryland.

Click here to subscribe to my nearly weekly newsletter and receive a free e-book, Write Your First Life Story Today
« Sumpter Martin – one tragedy after another
Please don’t follow this advice »