My mother, Gladys Martin Heiser, lived in Washington, D.C. before and during World War Two. From her memoir concerning the attack on Pearl Harbor:

On one Sunday, while listening to the radio, we heard that Pearl Harbor had been attacked and we would be going to war. Needless to say, it had a very sobering effect. Our minds raced trying to figure out the many changes our lives would take. Our immediate concern was for the military and families stationed at Pearl Harbor. I had a brother on the USS Hornet, an aircraft carrier. We heard later that some of the aircraft were not in port, including the Hornet. 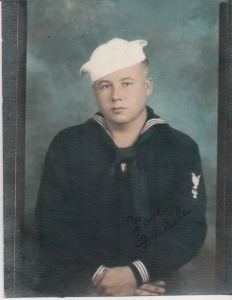 My mother’s brother, Carlisle Entzminger Martin, who was on the USS Hornet and the USS Iowa

The Hornet escaped the attack that morning, only to be sunk by Japanese planes later. My brother’s life was spared again and he was transferred to the USS Iowa where he remained until the end of the war.

Click here to subscribe to my nearly weekly newsletter and receive a free e-book, Write Your First Life Story Today
« Wordless Wednesday – Thanksgiving in Europe WW2
Merry Christmas to All »