Richard Roland LENHART was the only child of Claude O. LENHART (1900-1960) and Nettie J. PYLES LENHART (1906-1973). Richard was born in 1941 in Frederick County Maryland, though I don’t know the month and day. Richard was my 2nd cousin, once removed on my father’s side.

Claude worked as a foreman on road crews and in other supervisory positions. He and Nettie married sometime between 1930 and 1935 according to the census.  In 1935 and in 1940, they lived in Buckeystown, Maryland which is 15 or so miles south of Frederick. In 1940, Claude was 40 and Nettie was 34.

Their son Richard was born in 1941, and in 1946 they were living in Buckeystown, or at least they had a Buckeystown address.

I don’t know much about Richard except that he appeared to be a busy boy. On 18 August 1947 a terrible accident happened. According to The News, ‘At Lime Kiln it was reported at noon today that it was believed [Richard Lenhart] was pacing an oil truck of the Shell Oil Company, this city, which had been delivering kerosene just off the Buckeystown road.

Due to the wet grass the child slipped under the back wheel of the truck and his skull was crushed. In the meantime the driver, Richard E. ANGELBERGER, 109 Pennsylvania Ave, continued until an unidentified resident who saw the accident, stopped him.  He did not know that the truck had struck the boy.’ 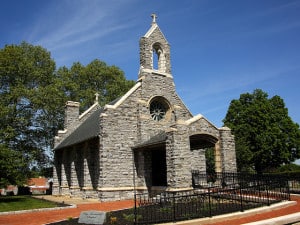 After the accident, Nettie picked up Richard, put him in her car, and drove him to the hospital. It is believed he died on the way.

Richard’s funeral was held on 20 August 1947, and he was buried at Mt. Olivet cemetery in Frederick, Maryland where many of my ancestors are buried.

In a few weeks, I’ll write about Nettie’s life after Richard’s death.