Florrie and the snakes

My grandmother, Florrie THOMAS MARTIN (1894-1979) was the wife of a tenant farmer. They moved from farm to farm, sometimes only staying for one growing season at a time.

One swampy farm in the Northern Neck of Virginia had water moccasins hanging from the trees near the house. Florrie took a shotgun and shot them all, sometimes hitting two at a time there were so many of them. This story was always amazing to hear, but I already knew my grandma was a tough woman so it didn’t surprise me. 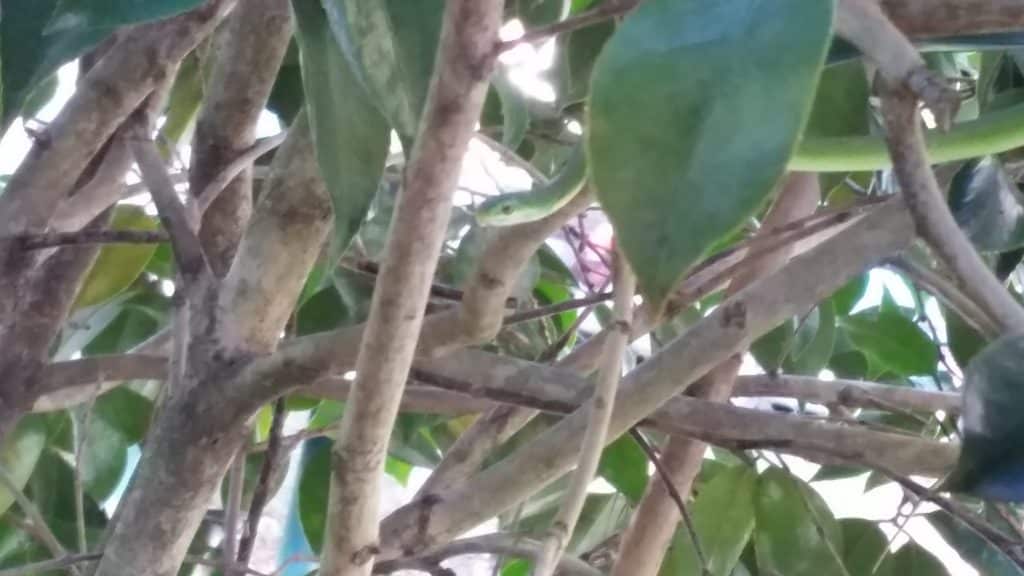 Garter Snake in a bush at my house

Mom and Joyce and the snake

My mom, Gladys MARTIN HEISER (1921-1999) often told my sister, Joyce, and me about her and her siblings handling snakes when they were kids. I got the impression they were small snakes like garter snakes and other non- poisonous ones. I’m sure as Mom reminisced, she had no idea the stories would lead to another up-close and personal snake encounter.

One summer day when Joyce was 10 or 11, and I was 6 or 7, there was some excitement going on next door. Jimmy, who lived next door, had a snake in a cigar box. He and his friends were daring each other to pick it up, but each was too scared to do it. Joyce was the only girl over there with the boys and the snake.

Suddenly Joyce got a bright idea. “My mom will pick it up. She picked up snakes all the time when she was a girl.”

Jimmy handed the box to my sister and the whole bunch of kids paraded around the fence dividing the yards. Joyce knocked on the door to get Mom to come. Mom opened the door to find Joyce and a small troop of neighbor boys with her.

Joyce announced as she held out the box to Mom, “Someone gave Jimmy a snake. Will you show us how to pick it up?”

(Joyce recalls the look on Mom’s face was priceless. Deer in the headlights.)

Mom pulled herself together and said, “Give me a minute. I haven’t done this in a long time.”

I’m sure Mom was relieved to find out it was just a green garter snake and not a big one, at that. But I’m sure she worried that her severely crippled, arthritic hands might not be fit for snake handling any longer.

Mom managed to pick it up enough to show Joyce how to do it. Joyce then reached into the cigar box and carefully picked up the snake. As she triumphantly turned around to show the boys, they all scattered off the porch and into the street. None of the boys ever did handle that snake.

Katie and the snake

This past Friday my daughter, Lara, called my attention to a snake resting on an antenna pole close to the house. It wasn’t a huge snake, maybe a foot long, but we thought it might be a copperhead.  A few photos taken and sent to the local wildlife center revealed it was actually a juvenile Eastern Rat Snake, a good snake to have around because they eat copperheads. 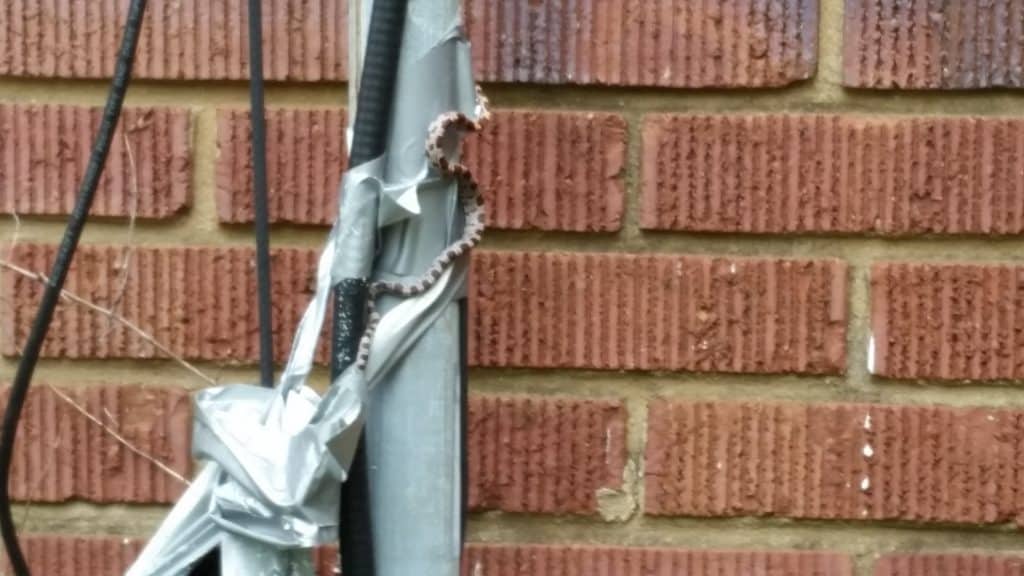 The snake hadn’t moved for a few hours by the time Katie, my other daughter, stopped in for lunch. She looked and said she thought it was stuck to a downturned piece of duct tape on the pole. I told her to take a long broom handle and nudge its tail a little bit to see if it would move.

Lara and I watched from a nearby window. When I took out my phone to take a photo, Lara said, “Hit record.” So I did. It was a good idea in case I had to explain to EMS or Katie’s husband how she came to have a snake bite.

Once it was established that the snake was indeed stuck, Katie went in for a closer examination.  Lara and I looked at each other with big eyes as Katie’s face was within a few inches of the snake’s, but nothing exciting happened.

Animal control came and rescued the snake about an hour later. It was released unharmed at the back of my property. 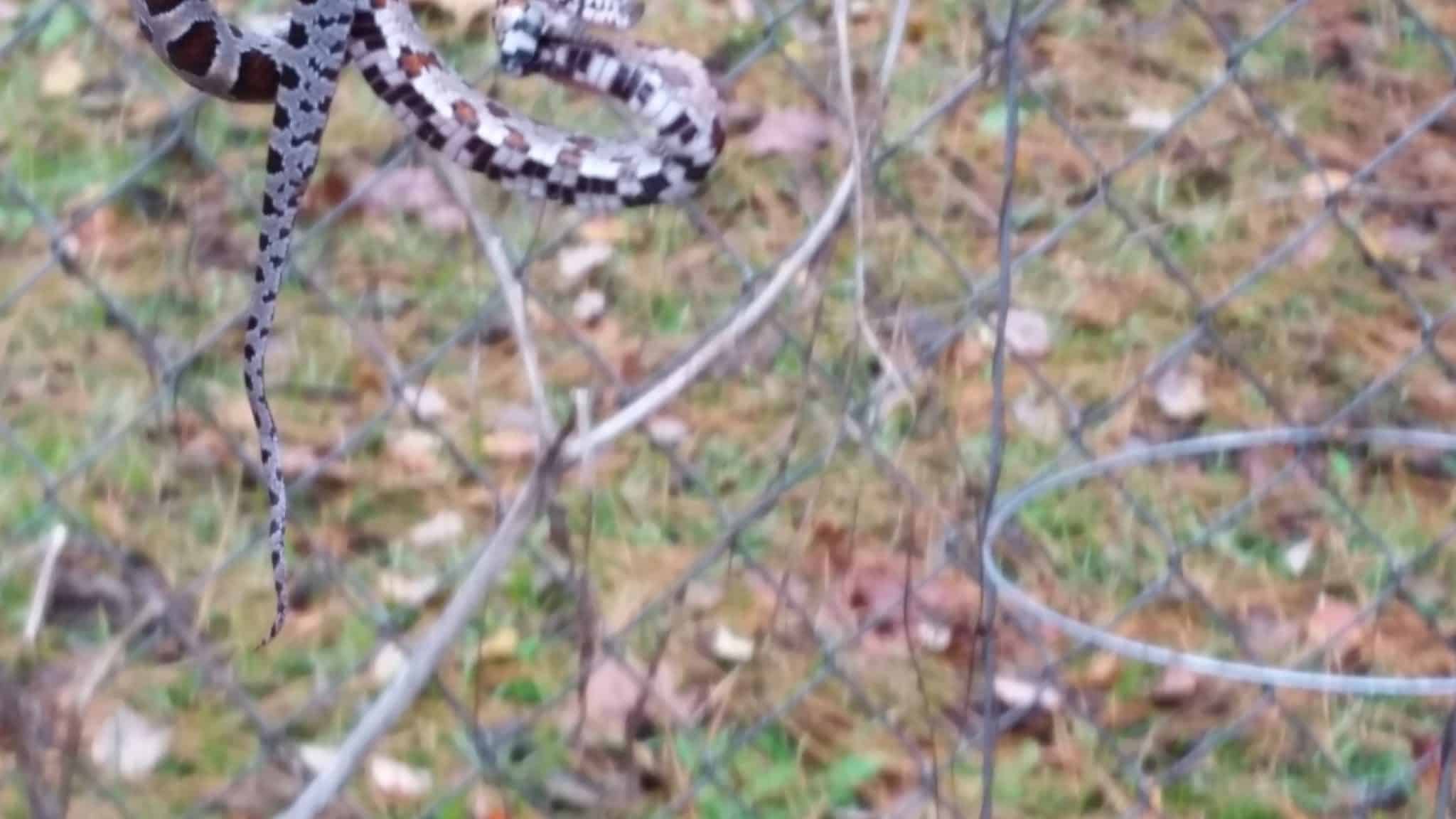 Best photo I could get after animal control came. It was a squirmy snake!

Joyce has things to say

When Joyce watched the video the next day she said it looked like something she herself would do. No surprise there!

Joyce also said, “It would have been hilarious if the snake had smacked Katie in the face with its tail.” Yes, it would have.

Do you have any wild animal encounters in your family history? If so, share below in a comment.

Click here to subscribe to my nearly weekly newsletter and receive a free e-book, Write Your First Life Story Today
« Mom and the false face: a frightening Halloween story
The Wrong Random Fact »