Harry and Susan left Maryland for Kansas between 1882 and 1889. I wrote about Harry here.

In 1900, Stearn and all of his siblings lived with their parents in Wellington, Sumner County, Kansas, about 35 miles south of Wichita. Stearn’s father was a painter, and so was Stearn, presumably working with his father. Stearn’s father died in 1905. Stearn continued living with his mother at the family home.

In 1910, 31-year old Stearn still lived with his mom, and he was still a painter. Stearn became a fireman for the city of Wellington in 1912. According to the Wellington Daily News, he was paid $60 per month. Also in 1912 Stearn brought a Boston Bulldog named Powder to the fire department headquarters where she became the mascot. 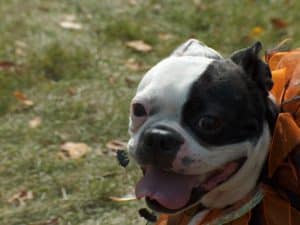 In 1918, he registered for the World War 1 draft. He was of medium weight and height, and he had brown hair and eyes. One thing he didn’t have was the ruddy complexion often noted in Hyser/Heiser men. Also in 1918, Stearn had influenza, probably the Spanish influenza that killed millions of people. He relapsed once and finally recovered.

Stearn and his friend, Frank WILDER, visited Wichita at least once in 1919. That’s probably where Stearn met Dorothy REYNOLDS BAKER, a divorced mother of one.

In 1920, Stearn still lived with his mother, but in 1921 he married Dorothy. Dorothy was 29, and Stearn was 42. From that point on, Stearn raised Dorothy’s daughter, Dorothy Mae, as his own.

1948 fire truck probably like the ones Stearn used when fighting fires.

The family continued living in Wellington, and Stearn continued as a fireman. Eventually he was promoted to Assistant Fire Chief. The local paper named him several times for his work as a fireman.

In 1940, 60-year old Stearn, Dorothy, the divorced Dorothy Mae, and her 3-year old son, JamesLloyd; all lived together at 316 W. 9th Street in Wellington. Here is a link to that neighborhood.

The Kansas state census shows that the number of people living in the household fluctuated between two and four over the next few years. At one point JamesLloyd is living with Stearn and Dorothy without his mother.

Dorothy, Stearn’s wife, disappears from the state census and city directories in 1948. I couldn’t find any information about her dying, but that’s probably what happened.  The now widowed 69-year old Stearn continued to live in their 9th Street home. Dorothy Mae married again, moved to 414 South H Street, and had another child.  Here’s a link to that neighborhood.

Around 1950, Stearn moved in with Dorothy Mae and her family. He retired from the fire department in 1952 at 73 years of age. Stearn passed away on 1 July 1955 after ‘an illness of several years’. He is buried at Prairie Lawn Cemetery in Wellington along with his parents and two siblings.

Click here to subscribe to my nearly weekly newsletter and receive a free e-book, Write Your First Life Story Today
« Time travel to an ancestor with Dr. Who
Sweet Strawberry Memories »