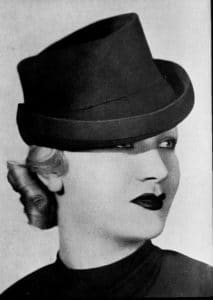 NOT a pic of Maggie, but Maggie probably wore a hat like this

Maggie Sullivan is a 1930’s private investigator in Dayton, Ohio. Maggie drives a De Soto, and she has a love for hats which were common attire for women in the 1930’s.

She’s smart and brave (sometimes too brave for her own good), wise about people, and not afraid to speak her mind when necessary.  She’s also protective of those she loves and of her clients. As you can tell, I like Maggie Sullivan; and I have enjoyed reading the five books in the Maggie Sullivan series by M. Ruth Myers.

This series is a grand example of how historical fiction can teach us about a time period by letting us immerse ourselves in it through the eyes of the story characters.

From reading this series, I’ve gained a better understanding of the world my father lived in. He and Maggie would have been born about the same time. He grew up in a small city, too: Frederick, Maryland. I imagine that the same sort of society existed in Frederick as in Dayton: the rich, the poor, and the in between. Maggie helps people in each of these classes, so there is opportunity to see how each lives through descriptions of homes, clothes, cars, mannerisms, jobs, and more. 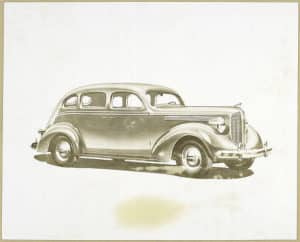 Maggie’s personal world is predominately Irish. Her father came to Ohio from Ireland and became a policeman. From him, Maggie learned a lot about investigating and about people. Her parents have passed at the time of the stories. Maggie’s father’s best friends, Billy Leary and Seamus Hanlon, (also Irish and policemen) are her ‘home’. She frequents Finn’s Pub, a regular destination for Dayton’s finest. The stories describe the pub itself, the patrons, the owners, the beers and liquor served, the food, and the music.

Maggie lives in a boarding house with other young single working women, like my mother did for a time when she was a government girl during World War 2. Details are provided about the house, the other residents, the owner, and the owner’s devilish cat. Boarding house living was common in cities then, and I was glad to learn more about them.

The stories drive home the everyday treatment of working women of that time, especially those in male-dominated professions. Maggie is doubted by some policemen, especially Detective Freeze. And she often hears that she should be home tending house and having babies. She is doubted by some people she encounters on her job, too, and seen as incapable and too delicate for the job. Still, tough-guy characters had no trouble roughing her up when necessary, and she gets into more than one life-threatening situation. 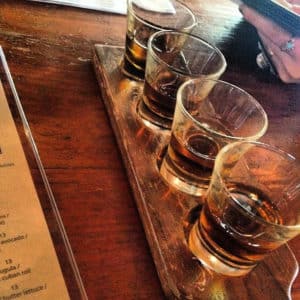 Maggie and other professional women drank just like the professional men they encountered. Photo by doctyper. http://tinyurl.com/jqxnan2

Maggie encounters other career women like Rachel Minsky, a Jewess, who runs a construction company. Maggie and these women have a sisterhood of sorts as they face the same opposition from the men they encounter personally and professionally.

Reading this series immersed me in the 1930’s and early 1940’s. The most recent book in the series takes place in November and December of 1941. The clothes, the language, the cars, and the way life all came to life for me. If you want to learn about this time period, give this series a try.