Music is the prompt for this week. I don’t have a specific story, but I can tell you about music in my mom’s family.

Being 18 years older than me, my cousin Rose Marie GANUS WARD (1941-2015) experienced our grandparents, aunts, and uncles in a different way that I did. For one thing, our Grandpop died when Rose was a young teen; whereas I didn’t know him at all. 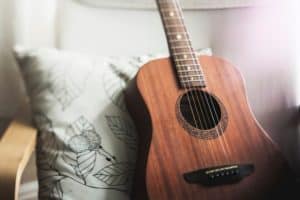 Just a guitar by Kari Shea. Click on photo for more info.

Rose said that Grandpop (Joel Daniel MARTIN 1886-1955) played the mandolin, guitar, and fiddle. He made sure all the kids could play the guitar by the time they were six years old. I think his ear for music is what made him love birdwatching so much and why he was able to memorize bird calls. Read about birdwatching in my family here. 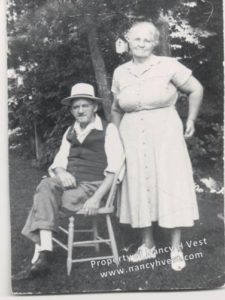 Daniel and Florrie Martin, my Grandpop and Grandma

When Rose would stay at Grandma and Grandpop’s when she was little, our Uncles Bobby (Robert Donald MARTIN 1928-2006) and Tommy (Marion Thomas MARTIN 1930-1978) were still underage and living at home.

Rose and them sang hymns until time to put Rose to bed. Then the others would go back to playing music and singing hymns, using the kerosene lamp to see by. Rose remembered listening to them as she fell asleep.

My mom, Gladys MARTIN HEISER (1921-1999), and another of our aunts, Millie MARTIN ATKINS (1926-1994), would take Rose with them on the train from Washington, D.C. to South Carolina to visit family.  Rose said, ‘It was war time and the trains were full of soldiers.’

Rose was only 3 or 4 when she traveled on the train with Millie and Gladys. I’m sure she was a hit with the soldiers because she looked like a brunette Shirley Temple, and she likely sang well. 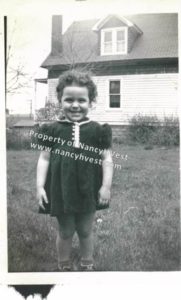 pint-sized Rose, about the age that would have been singing to the soldiers

My mom, Gladys, lived in Washington D.C. during the war. She said sometimes it was too hot so sleep so she and others would gather at Dupont Circle. Some would bring guitars and mouth harps. Sometimes someone would bring a horn. They would play and sing until it was finally cool enough to sleep. My mom said that when her brothers and cousins would visit, they happily joined in with the playing and singing.

A surprising song from Grandma

So did the love of and ability with music pass on in the generations? It did. Some of my first cousins know how to play instruments, and most sing as well.

The next generation also has some talented musicians – guitar playing and singing. And the one after that, the great-great grandchildren of Daniel and Florrie, has some guitar players and singers, too. One has even won competitions.

Click here to subscribe to my nearly weekly newsletter and receive a free e-book, Write Your First Life Story Today
« They were celebrities for a day
Coloring photographs: another of my mom’s talents »