My maternal grandmother, Florrie Thomas Martin, supplied me with the names of her parents, grandparents, and great-grandparents. She even knew their birth and death dates. She was a wealth of information.

I knew Florrie was born in Chesterfield County, South Carolina, and that her mother, Maggie Grant Thomas, was from there. Florrie’s Aunt Sally (sister of Florrie’s father) and her family lived there, too. 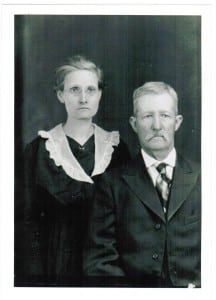 My great-grandparents, Dan and Maggie Thomas

Naturally, I concluded that Florrie’s father, Dan Thomas, was from there as well. Also, I knew that in their later years, Dan and Maggie lived in Chesterfield County which added to my belief they were all from Chesterfield County.

Put the Thomas family aside for awhile

For many years I concentrated on my own father’s family history since I lived close to where his people were from, so research was easier. This was before computers.

Many years later, I finally began working on my maternal line. My grandmother had passed, and her parents had passed long before I was ever born. But my mother’s first cousin, Agnes, knew a lot about the Thomas family. She had been raised in South Carolina, and she knew my great-grandparents, Dan and Maggie Thomas, and she knew Aunt Sallie and her children, too. My mom’s family had left South Carolina when my mom was about four, so she’d had limited contact with them all.

One thing puzzled me  – why did Dan and his family leave Chesterfield County for Richland County when Dan was about 45 years old…what was the draw to take them there. I asked Agnes. Her reply… “Well, the Thomas’ were from Richland County. He moved back to be close to his family.” 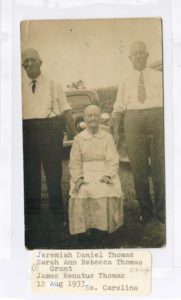 Turns out that Sallie married a man from Chesterfield County, Henry Grant, and moved there with him. (I have yet to discover how she met Henry to start with.) Henry died unexpectedly, and Dan left Richland County for Chesterfield County to help Sallie take care of her farm and her five young children.

Maggie Grant, Henry’s sister, caught the attention of Dan. They married less than a year later and started a family. Dan continued to farm Sallie’s land, and he was like a father to her children.

After living in Chesterfield County for many years, Dan and his family, including all their children except for their oldest son, moved to Richland County because Dan’s parents were aging and he was needed there.

When Dan and Maggie themselves got older, they moved back to Chesterfield County. One of Sallie’s sons, Jim T. Grant, built a little house for Dan and Maggie on his property. You can read about Jim T. and the house here.

Suddenly so much fell into place, like why I couldn’t find more Thomas’ in Chesterfield County or much of anything on these people except for some census records. The world of the Thomas’ opened up with this new found information. And I’ve been learning about the Thomas’ ever since.

I solved this problem by asking questions and taking notes. Whenever I speak to relatives, I have pen and paper nearby. You never know what tidbit will be said that becomes important later.

Click here to subscribe to my nearly weekly newsletter and receive a free e-book, Write Your First Life Story Today
« Curtis Chavis: gone at 18
The murder of Tom Lee »