My dad, Charles Leroy Heiser (1913-2001), loved the Washington Redskins. I don’t think he ever went to a live game, but he always watched their games on TV.

It was our family’s Sunday afternoon activity, and I cherished that time together. Watching the Redskins play now still brings back the feeling of all being right with the world.

One particular Redskins game will always stick out in my mind: the January 22, 1983 playoff game between the Redskins and the Cowboys. 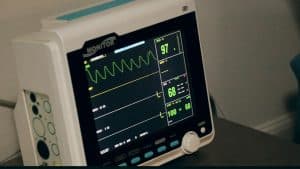 Dad was diagnosed with atrial fibrillation (A-fib) in December of 1982. The cardiologist gave him medicine, but the A-fib persisted. Finally the cardiologist said Dad needed a cardioversion.

Being a respiratory therapist at the time, I knew what that meant – shocking the heart for the purpose of resetting it to a normal rhythm. It’s only used when absolutely necessary because it can cause other complications, including death. I wasn’t thrilled about Dad having a cardioversion, but I resigned myself to the fact that it was necessary.

The procedure was scheduled for Monday, January 24 at Fairfax Hospital in Falls Church, Virginia. 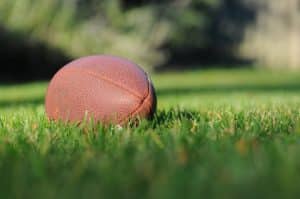 On Saturday, January 22, my parents and my sister (Joyce) and I gathered in front of the TV for the playoff game between the Redskins and the Cowboys. It was an exciting game with lots of 4th quarter action.

My dad was in rare form that day. He watched from his recliner, and I still remember him slamming down the recliner bench more than once as he came out of his chair to holler at the TV. He even got so excited one time that he tipped over a lamp. We’d never seen him like that before. The Redskins were victorious; and Mom, Joyce, and l exhausted just from watching the game and my dad.

Off to the hospital

Monday morning, Mom and Joyce and I accompanied Dad to the hospital. He kissed my mom at the door to the Cardiac Care Unit where the procedure would take place and entered in alone. 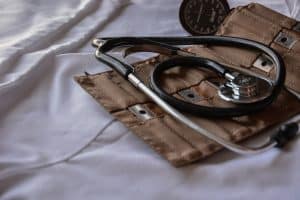 Cardioversion isn’t a long procedure. They monitor the patient for a little bit, sedate him, and then do it. Mom, Joyce, and I went to a nearby waiting room. Fifteen minutes went by. Then thirty minutes. Then an hour. We were getting worried and wondered what was going on in there.

Dad’s cardiologist appeared at the door looking a little confused. When they put Dad on the heart monitor there was no A-fib. He was in normal sinus rhythm. They monitored him for an hour and still no A-fib.

The doctor was astonished. He hadn’t ever seen this happen before, for A-fib to convert itself after so long a time. He asked what Dad had done over the weekend, if he’d gotten any exercise or gone anywhere.

A second win for the Redskins that weekend

We told him the only exercise Dad got over the weekend was jumping up and down and hollering during the Redskins game. The doctor concluded that Dad’s excitement and reactions during the game must have been enough stimuli to convert the A-fib.

Shortly after that, Dad left the hospital with his heart still beating normally.

Any sports stories in your family or in your own life? Tell about them in a comment or write them up for your own collection of personal or family stories.

Click here to subscribe to my nearly weekly newsletter and receive a free e-book, Write Your First Life Story Today
« Why I’ve been quiet the past few weeks
The Chihuahua Story »