This month’s Genealogy Blog Party prompt is about time travel with Dr. Who. Here’s my response:

If The Doctor asked, “So, who do you want to meet?”, it wouldn’t take me long to decide.

Jeremiah Daniel Thomas, called Dan, was my great-grandfather, the father of my beloved grandmother, Florrie Thomas Martin, who lived with my family until she passed when I was 19. 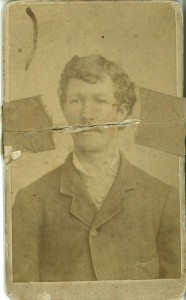 Dan is the perfect intersection ancestor, the one who would yield the most genealogical information from his generation and the two before him. I would choose to visit Dan in the mid-1910’s before age, and possibly dementia, stole away his memory of his parents and his grandparents.

Would I tell him who I was? Gosh, that’s a hard one. Dr. Who always says NO. It messes up the time continuum or something like that.

To be safe, I would instead tell him that I was recording the history of people in the area and hope he’d be willing to talk. (There actually were a few men in Richland County, South Carolina where Dan lived who were doing that in the 1920’s, so this wouldn’t be a farfetched story.)

First, I’d ask factual stuff like How did your sister Sally meet her husband, Henry Grant, and how did Henry die?  I would ask about Dan’s grandparents, Renatus and Mahaly Thomas…what were they like, where are they buried?  Who were Mahaly’s parents and how did Renatus’ father end up in South Carolina?

Tell me about your parents, I’d say. What were they like? How bad was your father’s war injury? Was your mother a good cook?

I’d move on to his other grandparents, John and Mary Davis. Were they from Richland County? If not where did they come from? What did they look like? What were they like?

I’d want to know about Dan’s life, too, like how he felt when he was sent to Chesterfield to help Sallie when Henry died, and how long he courted my great-grandmother. What brought him back to Richland County? And so much more. 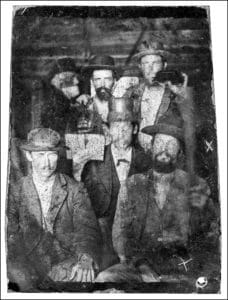 The tintype that haunts me.

Finally I have a tintype with his name scratched on the back. That tintype haunts me. Who are these men, when was it taken, where are they, and what are they commemorating? And is that you in front on the left?

I will say, though, that as much as I would love to know about the tintype, I would let that go to get all my other questions answered.

It would be hard to leave him. One question always leads to another. I could stay with him for days and still have questions to ask. The Doctor would have to tell me it was time to go. I don’t think I’d take Dan to the future with me. That would probably mess up the time continuum, too. 😉