Tinker was a cocker-beagle. She was tri-colored like a beagle, but her face was cocker-shaped, and she had short, wavy hair on her ears. Tinker was a good watchdog.Her deep, hound-dog bark scared newspaper carriers, the milkman, the mailman and anyone else that she didn’t ‘know’. 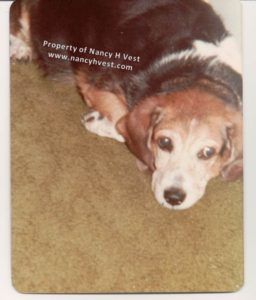 How could anyone be afraid of that sweet face?

Our mailman was terrified of Tinker. Tinker would start howling even before he stepped foot on the driveway. You’d think the Ringwraiths from Lord of the Rings were storming the house the way she barked. The mailman was clearly shaken by Tinker’s barking.

In warmer weather, Mom would leave the front door open so air could flow through the locked screen door. (Yes, this was before we had central A/C.) Every day, Tinker would bark and snarl through the screen at the mailman. And every day the mailman kept one foot against the metallic bottom half of the screen door as a safeguard against the seemingly rabid Tinker. We tried to convince him that Tinker wouldn’t hurt him, but he would have none of that.

As you can guess, everything changed one summer day. 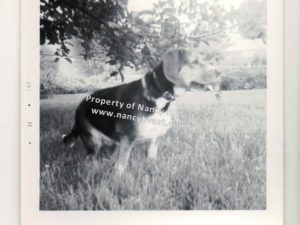 Tinker at about two years of age

The door swung open and Tinker came barreling out and onto the porch. I’m not sure who was more surprised, the mailman or Tinker.

My mother, my sister and I came running to find the mailman on the porch and Tinker down the steps and in the front yard barking and howling and yipping at the mailman. Her hair was up on her back, her tail was between her legs, and she was clearly glad to see we had come to her rescue.

Once we got Tinker and the mailman calmed down, the two made nice with each other. He petted Tinker, and Tinker wagged her tail. From then on, the mailman no longer put his foot on the door when he delivered the mail. And Tinker’s only bark in his direction was a friendly hello kind-of-bark.

I wrote about Tinker in honor of National Dog Day which was on Tuesday this week. Please share your dog story below. I’d love to hear it.  Leave a comment, please!