Not their farm…just A farm

Woodrow’s father was a farmer in the Pontiac area of Richland County which is north east of Columbia. In 1920 Woodrow, his parents, and his siblings were farming in Pontiac on Old Charleston Road.

Woodrow’s sister, Hattie, and her husband lived on the farm next door. Two farms away in the other direction was the MEDLIN family, one of whom (Eddie) would later marry Woodrow’s sister, Allie.

In 1930, 17-year old Woodrow lived with his mother and three siblings on Green Street in Columbia. Woodrow and his siblings all were textile workers at a cotton mill. Mother Mary is listed as married, but father John wasn’t listed on the census. I don’t know where he was. 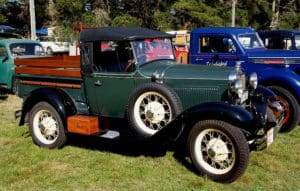 On Thursday, 24 Dec 1931, Woodrow was in a car accident at 11 a.m. He was driving alone on ‘the Blythewood highway’ in Richland County according the The State, and he struck a sandbed. ‘The car turned over, the hub of the left front wheel crushing his skull and pinning him underneath the automobile.’ It was reported that he died instantly.

Woodrow was buried at Salem Methodist Church cemetery on Ft. Jackson in Richland County on 26 December 1931. His gravestone reads: gone but not forgotten

With all the safety features on modern cars, Woodrow probably would have survived a car roll like this today. But in 1931, driving a car was dangerous business. No speed limits once out of cities and towns, few safety features on cars, probably still sharing roads with horses and wagons in rural areas, and questionable road conditions.

Woodrow wasn’t the only Christmas tragedy for the Dinkins family. I’ll write about the other one in the next week or two.

Click here to subscribe to my nearly weekly newsletter and receive a free e-book, Write Your First Life Story Today
« The lantern in the cemetery
Allie Dinkins: another Christmas tragedy »